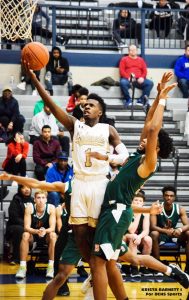 SCRAP GOING UP FOR TWO POINTS – After getting a steal, Colonel senior guard Nakyir “Scrap” Joyce goes up for the contested lay-up during his team’s victory over Fredrick Douglass on Monday night at Lexington Catholic. Scarp finished the four-day tournament with 29 points, a team-high 24 assists and 8 rebounds. 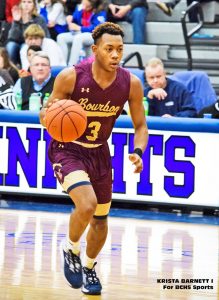 “AJ” MADE SOME SERIOUS NOISE AT CATHOLIC – Senior guard Amirion “AJ” Joyce had an outstanding tournament during the Traditional Bank Holiday Classic. During his team’s 4 games, AJ totaled 93 points (23.2ppg), 18 rebounds, 8 steals and dished out 10 assists. He scored a season-high 35 against Madisonville-North Hopkins.

LEXINGTON, KY – Coach Lamont Campbell’s Bourbon County Colonels, freshly off a third place finish at the prestigious Traditional Bank Holiday Classic, will enter the new year as the No.1 ranked team in the 10th Region.

Bourbon’s lofty rankings are certainly worthy because of their resume that have seen them play against five teams (Henry Clay- twice, Collins, Madisonville-North Hopkins, Frederick Douglass and Male) that are ranked among the top 20 in the state. The Colonels’ record against those schools, 3-3, although the game against Male was a scrimmage.

Regardless, not only has Campbell’s team shown everyone that they could play with the elite, they made huge believers out of one publication that has them ranked No.9 in the latest Kentucky High School Basketball state poll. Above them are two teams (John Hardin and Lexington Catholic) Bourbon could see in the near future if things play out the way it should during the upcoming Kentucky 2A Championship that starts next week around the state with eight different sections. Bourbon, the defending champion, will be the host site for section 5. More on that in an article coming next week.

Last week, Bourbon entered the Traditional Bank Classic coming off their first loss of the season against Henry Clay that saw them lose in an overtime thriller on a Marques Warrick buzzer-beater. Despite the heartbreaking loss, the Colonels didn’t let that bother them as they regrouped fast enough to “get busy” during the four-day Classic, where they finished as the third best team in the field out of 16.

“This past weekend was a great mid-season for our guys. Not only the competition but the feel of 4 games in 4 days,” said Colonel Coach Lamont Campbell. “Getting the opportunity to face a well-coached Madison Central team, a top 5 Collins team, a top 5 Madisonville team and finishing the tournament off with top 20 Frederick Douglass can only help our guys develop. Going 3-1 was not an easy task.”

Below is a recap of the four-games played by the Colonels.

The Colonels grind out a first round victory over the Madison Central Indians 53-46. 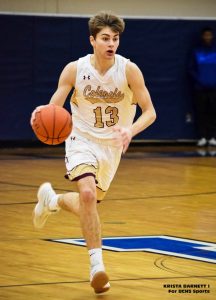 HUCKABAY CAUGHT FIRE – Bourbon County junior Jack Huckabay pushed the ball up the floor during the Colonels’ game against Frederick Douglass. The night before the matchup with Douglass, Huckabay caught fire against Madisonville-North Hopkins that saw him score 19 points, which included 5 three-point field goals made, where he hit three in a row during a crucial third quarter run by Bourbon.

In game two, the Colonels charged back from a 12-point deficit to upset No.4 Collins to advance to the semifinal round against No.3 Madisonville. Rankings were based on the highest ranking (by any publication) given to a team at the time of the game.

Bourbon, behind a three from Collins, grabbed a 38-37 lead before Martha Layne Collins (11-3) closed the third quarter with a last-second sidestep pullup three from Ben Omer that pushed the Titans in front 40-38.

Collins maintained their lead throughout the final frame until Bourbon’s Brycen Collins, after receiving the pass from AJ Joyce, nailed a baseline three near his team’s bench that pushed the Colonels in front at 55-53 with under two minutes remaining. BC’s lead grew to 59-53 before the Titans closed it to 59-56 with 14 seconds showing on the clock. Campbell’s team would then hold on down the stretch to pull out the 60-58 thriller.

Playing against a Madisonville-North Hopkins team that featured two of the best players in the state in senior 6-7 swing Kenny White and 6-9 mammoth senior Ksuan Casey, the Bourbon County Colonels, despite falling down by as much as 17, never quit, as they rode the second half shooting of junior Jack Huckabay to a sensational and exciting comeback that saw them cut the margin all the way to two points before they faded at the end.

The Maroons led 19-7 at the end of the first quarter and took a 40-23 lead midway through the second frame before Bourbon closed the period with consecutive baskets by AJ Joyce that made it 40-27 at the half.

But was it over? No, not by a long shot!

Bourbon, thanks to back-to-back-to back treys from Huckabay and nice steal and dunk from AJ, wiped out that 17 point deficit with a huge 18-3 run that spanned over two quarters that got BC to within two of the Maroons at 43-41.

Two quick scores by the Maroons to start the fourth made it 63-49.

Bourbon answered with a 7-0 run that was capped by a Scrap Joyce three to get the margin back under single digit at 63-56. The Maroons maintained a 10 to 11 point advantage throughout the final period, before Campbell’s team made another nice run to get to within five at 76-71 on a steal and layup by Huckabay. From there, Madisonville-North Hopkins closed the game by scoring the final five points to get to their 10-point margin of victory at 81-71.

AJ Joyce led all scorers with a game and career-night 35 points, which saw him score 19 of his points from the free throw line. Huckabay hit five threes in route to 19 points. Scrap Joyce finished with 8 points, Bone Joyce had 4, Lukonga 3 (6 rebounds) and Collins was held to a season low 2 points. 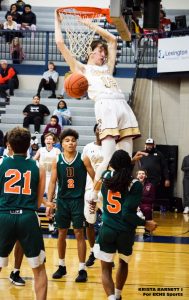 COLLINS WITH ANOTHER HOUSE CALL – Colonels senior Brycen Collins put on a “dunk show” including this rim rattler in front of several Douglass players during the recently held Traditional Bank Classic that finished on Monday. Collins’ numbers over the four games saw him with 57 points, a team-high 27 rebounds, 7 steals, 5assists and 15 blocks. What makes this even more impressive, the Louisville Baseball commit, only scored 2 points during their semifinal loss to Madisonville-North Hopkins.

“I think the matchup with Madisonville was huge,” the Coach said. “The type of size they have kind of offset our speed. I think AJ did a great job of trying to lead us and attacking them. He finished with 21 free throw attempts so hats off to his aggressiveness. I think this is a game we all will grow a lot from.”

Playing their third ranked team in as many days, the Colonels started fast and held the lead throughout the game until the final quarter when free throws came into play.

Miss, after miss, after miss, gave the Broncos a chance to crawl back into the game, before the Colonels hung on for the hard earned three-point win to capture third place.

Bourbon led 21-14 after one quarter and 36-26 at the break. Collins 9 points, Scrap Joyce 7 points and AJ Joyce 6 points, paced the Colonels throughout the first half. Bourbon led by as much as 14 in the first half following a dunk by Collins, one of three on the night.

A drive to the basket two handed dunk by Collins that was followed by a steal by Scrap that led to an alley-oop dunk by Collins, moved Bourbon’s lead out to 50-33 midway through the third. Campbell’s team would go on to lead after three quarters 55-42.

FD scored the first six points of the fourth to close the gap to 55-48 and before the Colonels realized it, thanks to some bombs by DaShawn Jackson, Douglass had cut the gap to

three (64-61) and with the ball, although they couldn’t convert on their end of the floor.

A breakaway dunk by Huckabay helped the Colonels move their margin back to six at 66-60 but only to see Douglass (9-4) fight back. The Broncos had a chance to tie it at the end but a desperation three at the buzzer by Jackson came up short as the Colonels held on for the 69-66 victory.

During the fourth quarter alone, Bourbon made just 5 of 18 free throw attempts, missing 7 straight at one point, which allowed Douglass back into the game.

Collins finished his evening with 19 points, 7 rebounds and 6 blocks as he bounced back beautifully from his previous game. AJ Joyce scored 18 points, pulled down 10 rebounds, along with 3 assists. Lukonga had his best game of the Classic after totaling 15 points and 9 rebounds, while Scarp Joyce had 9 points, 4 rebounds and 6 assists. Other scoring came from Bone Joyce with 3, Amari Faulkner 3 and Huckabay 2.

The Colonels (11-2) will be back in action Saturday night when they travel back to Lexington for the eighth straight time when they battle a very good Tates Creek Commodore team (8-4) that won the consolation round of the bracket at the Traditional Bank Holiday Classic.

“I think as a group, this team believes in each other and we showed that in games that we are down, and we fight back,” Campbell said. “Looking forward to a good second half off the season.” 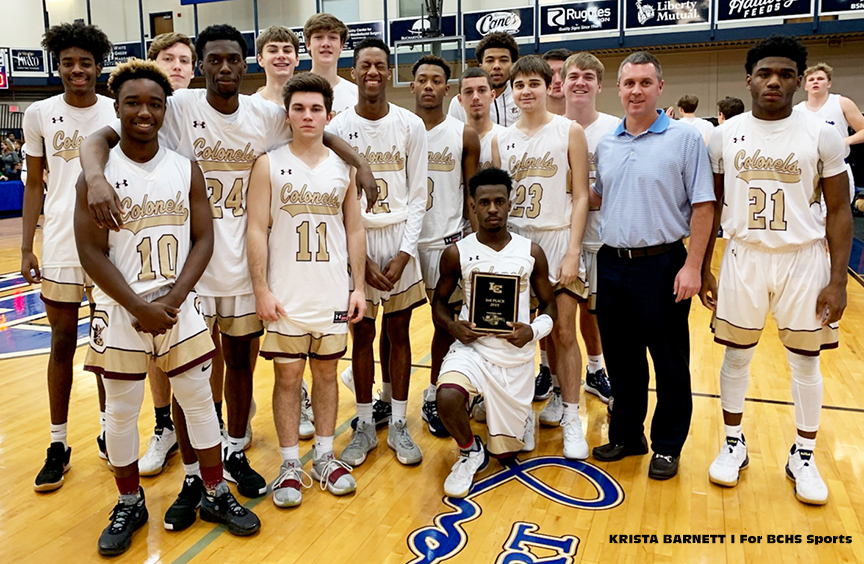