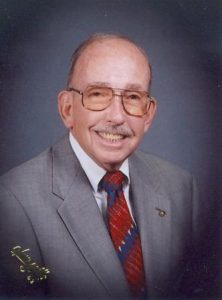 James Arthur Orr, Jr., M.D., 88, of Lexington went to be home with his LORD on December 31, 2019 at his residence in Wesley Village (Wilmore, KY); his son and daughter at his side.
Jim was born in Paris, KY on March 3, 1931 as the only child of the late James Arthur Orr, M.D. and Lavalette Ford Ranson Orr of Paris.  He grew up on Stoner Ave. with his cousin, Stevenson Brooke Ranson, who was more like a brother.  As a young man, he joined the Boy Scouts, earning the highest rank of Eagle Scout.
Jim attended Paris High School and earning his diploma at Baylor School in Chattanooga, TN.  He was an undergraduate of Vanderbilt University and attended medical school at the University of Louisville, where he met his wife, Ann.  He served as a resident at Henry Ford Hospital in Detroit, MI and started a family while attending.  He served two years as a Captain in the US Air Force at Homestead Air Force Base in  FL before settling down in Lexington with his growing family.
A practicing Cardiologist for over 40 years, Dr. Orr spent most of his career serving the Bluegrass through the Lexington Clinic and St. Joseph’s Hospital. He enjoyed many associations as a lifetime member of the Lexington Medical Society. Jim was a member of First United Methodist Church on High Street for over 50 years, where he and Ann served as youth leaders in their early years.
Later, he served as an usher, took communion to shut-ins and served on the administrative board.  He loved the LORD and was a life-long student of the Bible.  Jim had a generous spirit and contributed to numerous historical, military and charitable societies.  He was a Kentucky Colonel and a proud veteran.  Jim was an active member of the Rotary Club of Lexington for over 50 years.  He loved a beautiful afternoon of fishing at Lake Cumberland or on the pier of Nags Head, NC. He also loved a lively UK ballgame and any time spent with his family.  He was a loving son, husband, father, grandfather, physician and friend.  Dr. Orr was preceded in death by his beloved wife, Mary Ann Russell Orr of Cumberland, KY.
He is survived by his two children, James Arthur Orr, III and wife Wenchun Kang of Lexington and Mary Katherine Orr Morgan and husband Stephen Paul of Chesapeake, VA.  Surviving grandchildren, Stephen Joshua and his wife Emelie, Olivia Marie Morgan Dyer and husband Jacob, Katherine Ann Morgan Lee and husband Taylor, Audrey Jane, Claire Elizabeth and Ying Zhai Lele Orr.  Surviving great grandchildren are Indiana Fletcher, Elijah Taft and Wiley Harper.
Visitation will be held from 5-8 pm Fri. January 10, at Kerr Brothers Funeral Home, Harrodsburg Rd.  Jim’s Celebration Service will be conducted by Rev. Todd Nelson at 10 am, Saturday, January 11, at First United Methodist Church, 200 W. High St., Lexington, KY 40508.
A short graveside service will follow at Paris Cemetery.
Pallbearers will be Bill Hughes, John Isaac, Tom Isaac, Bob Fleming, Doug Boggs and Danny Siders.  Honorary pallbearers will be Bill Smith, Rick Bailey, Jim Heidinger and David Bondurant.  In lieu of flowers, the family has requested that monetary expressions of sympathy be given in his memory to the Bluegrass Care Navigators, 2312 Alexandria Dr., Lexington, KY  40504.