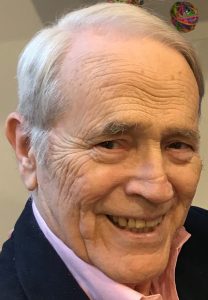 Charles Price Harper Jr., 81, died at his home on Saturday, January 18, 2020. He was the loving husband for 40 years of Margaret Miller Ward Harper and the son of the late Dr. Charles P. Harper and Marie Radabaugh Harper. He graduated from Marshall University in Huntington, WV with degrees in Engineering and Journalism.

Mr. Harper’s extensive broadcasting career began in Huntington in 1951. He held executive positions with Cowles Publications, Starr Broadcasting and Shamrock Broadcasting, a Disney family company in Los Angeles, CA. He was mainly responsible for the channel change of WTVQ-TV from Channel 62 to Channel 36 in 1980 while also serving as general manager of the Lexington television station. As Shamrock’s Vice President, one of his many projects was the building and development of the tallest broadcast tower in Georgia, which served several broadcast stations, including Disney’s WFOX in Atlanta. He was also an owner of several broadcast operations. His professional associations included Broadcast Pioneers, National Broadcasters Association, Kentucky Broadcasters Association and West Virginia Broadcasters Association.

Mr. Harper was active in various Paris-Bourbon County community organizations including the Planning Commission and the Library Board. He was a member of Keeneland Association and the Catholic Church of the Annunciation.