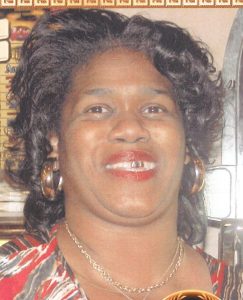 A native of Paris, KY, she was the daughter of the late Charlie “Doc” and Mary Alice Allen Howard.  Teresa was a 1974 graduate of Paris High School and a member of the Seventh Street Christian Church, Paris, KY and attended the St. Paul United Methodist Church, Paris, KY.  She was loved and cherished by many and she enjoyed spending time with her family and friends.  She loved to entertain, play cards, bingo, going to the Red Mile and yard selling.  She also enjoyed cooking and would often lend a helping hand to those in need.

In addition to her parents, she was also preceded in death by three sisters, Gloria Clay Howard, Mildred Chenault and Lena Mae Howard and two brothers, Julius Howard and Brice Howard.

Visitation will be from 10:00 AM Saturday February 22, 2020 until the hour of service at the church.