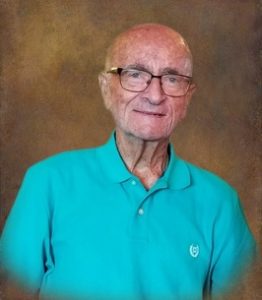 In addition to his parents, Bud was preceded in death by a son, Stephen S. Quigley.
Bud was a graduate of Cynthiana High School, Class of 1950. He spent four years in the United States Air Force, three years stationed in Great Britain. Bud was a 39 year employee of IBM and Lexmark and was a member of the Catholic Church of the Annunciation. He had a passionate interest and love for his pet dogs, jazz and spiritual music, and sports of all kinds but especially his Kentucky Wildcats and Cincinnati Reds.
Mass of Christian Burial will be held 11:00 a.m. Saturday, February 29, 2020 at the Catholic Church of the Annunciation with Rev. Daniel Fister officiating.

In lieu of flowers, contributions may be made to the Church of Annunciation choir or one’s favorite charity.