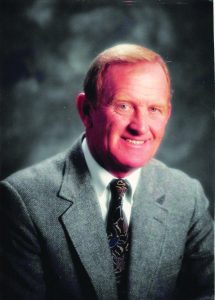 Freddy Gayle Gillespie, age 85, husband of Linda Hilander Gillespie, died on Tuesday, February 25, 2020, at his home.   Born, November 25, 1934, in Nicholas County, he was the son of the late Carl Thomas and Mabel Wagoner Gillespie.   He was raised in Bourbon County and graduated from Bourbon County Vocational School.  He was a member of Millersburg Presbyterian Church, Millersburg, Kentucky.  Mr. Gillespie was a well-known tobacco farmer and worked for the British American Tobacco Company, traveling to North Carolina and Mexico for several seasons in that capacity.  He was a retired manager and President of the Farmers Tobacco Warehouse of Paris, was co-owner of the Millersburg Coal & Lumber Company, and was a formulator for the Millersburg Fertilizer Company.   After retirement, he still did some farming – mainly grain crops and cattle.  He served as President of the Bourbon County Farm Bureau, was a former member of the Bourbon County Fiscal Court as magistrate from Millersburg, served on the Ermine Mattox Agricultural Scholarship Committee, and on the Wagoner Family Reunion Committee.  In 2015 he was honored as a sixty-year member of the Amity Lodge #40, Millersburg, Kentucky.  He was a Kentucky Colonel.
In addition to his wife of 57 years, he is survived by son, Stacey T. Gillespie of Lexington; daughter, Shannon Short of Cynthiana; son Samuel L. Gillespie of Berea; grandson, Austin L. Short of Cynthiana; brother, Harvey T. “Tommy” Gillispie of Carlisle; sister, Alice (Dr. Emerson) Cochran of Kennesaw Georgia; hundreds of cousins, nieces, nephews, and very special friends.   He was preceded in death by a sister-in-law, Mary Della (Tommy) Gillispie.
Services will be held at Hinton-Turner Funeral Home on Saturday, February 29, 2020, at 4:00 p.m. with the Reverend Dr. Henry Hanna officiating.   Pastor Lucy Marsh will provide musical selections.   Visitation will begin at 1:00 p.m. until time for the service.   A private burial will be held at Millersburg Cemetery at a later date.
In lieu of flowers, the family suggests memorial gifts to Millersburg Cemetery, P.O. Box 514, Millersburg, KY 40348-0514.   www.hintonturner.com