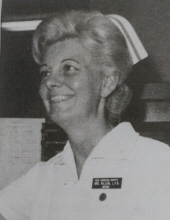 She graduated from Bourbon County High School in Millersburg and from Appalachian School of Nursing in Lexington. She retired from Good Samaritan Hospital in Lexington. Marion was a member of the Trinity First Church of God.

In addition to her parents, she was also preceded in death by her former husband, Charles (Charlie) Wilson; Brother, Rankin Byrd (Mary), and two sisters, Pauline Soard and Barbara (Donald) Rankin.

She will be interred in the Millersburg Cemetery at a later date.

Please make donations to the Good Samaritan Hospital Foundation, Lexington, KY.
The funeral arrangements were entrusted to the Lusk-McFarland Funeral Home, 1120 Main St., Paris, KY 40361.
Our sympathy and condolences go to Ruby and all the family at this time.  RIP Miss Marion.
Posted in Obituaries