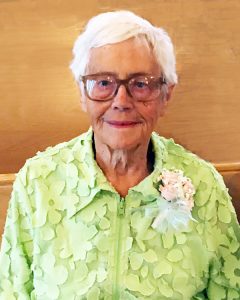 Mary Louis Mitts Evans, 95, of Winchester, widow of John Thomas Evans, Jr., departed this life on Thursday, March 19, 2020. She was born in Williamstown, KY on August 25, 1924, the daughter of the late Ott Louis and Mary Flege Mitts, received her Bachelor of Science Degree from the University of Kentucky and Master of Science Degree from the University of Wisconsin.   She was very active in the community having been a member of the Paris Bourbon County Historical Society, former member of North Middletown Cemetery Board, the North Middletown Community Club, Alpha Gamma Delta Sorority, Phi Epsilon Omicron Honorary Society, Girl Scout leader for many years, a 4-H leader, and had been a member of the North Middletown Christian Church for over seventy years.

There will be a memorial service at a later date.   In lieu of flowers, the family suggest donations to the North Middletown Christian Church, P.O. Box 43, North Middletown, KY40357, or the charity of your choice. www.hintonturner.com