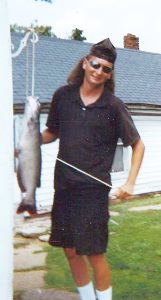 Jeffrey Wade Wagoner James, 51, died Wednesday, March 17, 2021, at the Bourbon Community Hospital, Paris, KY.
A native of Lexington, KY, he was the son of Elizabeth A. Wagoner Randolph. He was a farmhand and did maintenance work.
In addition to his mother, he is survived by his stepfather, Bill Randolph; one step brother, James Randolph and one step sister, Kathy Prince.
He was preceded in death by his grandparents, Ora and Christine Wagoner; half brother, Steven James; step sister, Michelle Hughes and dear friends, Lynn and Dan.
Services are private.
The funeral arrangements were entrusted to the Lusk-McFarland Funeral Home, 1120 Main St., Paris, KY.
The online guestbook is at www.Lusk-McFarland.com and a 24 hour funeral information line can be reached by calling 859-987-4387.