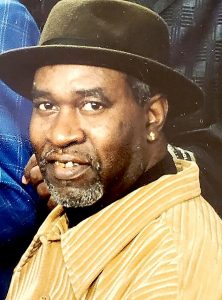 He was the son of the late Matilda Susan Butler Allen Bradley and William Howard Allen.

He graduated from Paris High School in 1969, in Paris, KY, and was a member of the Seventh Street Christian Church where he joined under the Pastorate of the late Dr. I. H. Moore.

He was employed by Chevrolet in Muncie Indiana before he moved to work for his Uncle Noah Hurley Jr in Minnesota. That’s where he met his wife Jimmie Allen of 25 years.

When he retired he and his wife moved to Ft. Walton Beach Florida where he resided for 14 years before his death.

He leaves to mourn his death his wife, Jimmie Allen, his daughter, Mary Ellen Allen, a grandson Zayden Allen, a son, Frank Allen Jr. two stepsons, Carlos and Ciedrick Griggs whom he called his sons. He is also survived by his sister Weida Allen, a brother Rev. William Allen (Sandra), his aunts, Rena Hurley and Mary Speaks, an uncle, Frank Allen, a host of nieces, nephews great-nieces and great-nephews, and a host of cousins plus his friend for life David “Boo Boo” Mack.

God saw the road was getting rough and the hills were hard to climb;

He gently closed those loving eyed and whispered, “peace be thine.”

The weary hours, the days of pain the sleepiness nights are passed.