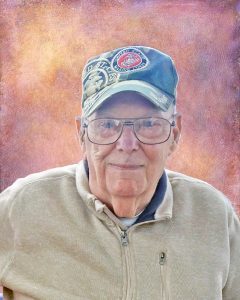 Ronald Alvin Elkin, widower of Mary Alice Cinnamon Elkin, departed this life on Wednesday, December 11, 2019, at the University of Kentucky Medical Center in Lexington, having attained the age of 86 years.   He was born in Lexington on December 5, 1933, the son of the late Zachariah Fielding and Ruth Rector Elkin. Ronald was a graduate of Lafayette High School, a Veteran of the United States Marines having served in Germany, Greece and Turkey, a retired automobile salesman, and a member of the River of Life Ministries.

The funeral service for Ronald Alvin Elkin will be Monday, December 16, 2019, at 1:00 p.m. at the Hinton-Turner Funeral Home with Pastor Krista Hampton officiating.   Inurnment will be in Millersburg Cemetery with honorary bearers being Joshua Dyer, Drew Griffith, Auralee Upchurch, Gene Elam, and the members of River of Life Ministries.   The family request friends to call at Hinton-Turner Funeral home after 11:00 a.m. until time for the service.

In lieu of flowers, donations are suggested to go to River of Life Ministries, 616 Clintonville Road, Paris, KY 40361.   www.hintonturner.com