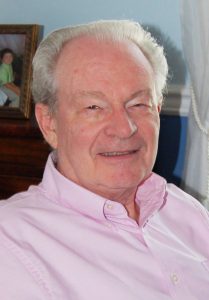 Kenneth Smith, 83, husband of Janie Daugherty, formerly of Paris, passed away at their home in Mobile, Alabama, on Friday, January 3, 2020. He had fought Parkinson’s disease for many years. He was a native of Blackpool, Lancashire, England, oldest child of Sydney and Margaret Smith.

Ken earned a degree in Mechanical Engineering from Leeds University, England. He and his first wife and their children came to the U.S. in the late 1960s. They moved to Mobile in 1972 when Ken accepted a job with Teledyne Continental Motors building small airplane engines.

Ken and his family became American citizens in 1976. But he never forgot his British roots. He collected books about English antiques, geographical and historical points of interest.

Funeral services were held on Thursday, January 9; guitar music was provided by Janie’s sister and brother-in-law Betsy and John Tako