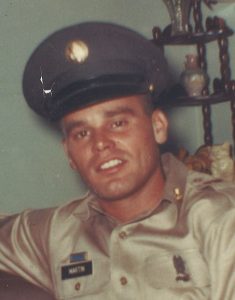 A native of Bourbon County, KY, he was the son of the late William Pellam and Golden Catherine Coffey Martin.  He was a retired employee of IBM/Lexmark, a United States Army Veteran, an avid fisherman, hunter and UK Basketball fan.  He was a member of the Hilltop Wesleyan Church and First Baptist Church, both in Paris, KY.

In addition to his parents, he was also preceded in death by one sister, Mary Whalen.

Funeral services will be conducted at 11:00 AM Monday February 3, 2020 at the Lusk-McFarland Funeral Home, 1120 Main St., Paris, KY by David Dotson.  Burial will be in the Evergreen Memory Gardens, Paris, KY

Memorials may take the form of contributions to Bluegrass Care Navigators, 1317 US-62, Cynthiana, KY 41031