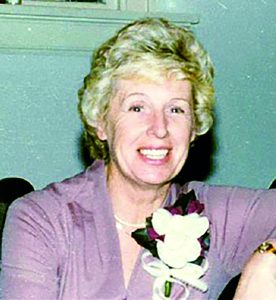 Olive Wells Mitchell, age 84, passed away peacefully on January 29, following a long illness.
Born on July 28, 1935, in Lancashire, England, Olive was the only child of Florence and William Hackney.
In 1955, Olive came to the US where she married Marvin Dean Wells and moved with him to Paris, Kentucky.  Together, they had one daughter, Elaine Wells Hofelich, who resides in Roswell, Georgia with her husband, Rick.  Marvin D. Wells preceded Olive in death.
Olive lived in Paris for 25 years where she was an active Paris High School band parent, and was well known among both her and her daughter’s friends to make the best bourbon balls and banana bread around.  Olive moved to Lexington, Kentucky and married Leonard Mitchell Jr, who later preceded her in death.  Following her retirement from Transylvania University, Olive moved to Atlanta, Georgia where she remained until her death.
Throughout her life, Olive loved sweets, football, dancing, and travel.  She also was an avid animal lover, a passion she shared with her daughter.  Olive was a member of several animal welfare organizations, and was a notable volunteer, active in the care of a feral cat colony for 10 years in Atlanta.
A memorial service will be held on March 28 at the Chattahoochee Nature Center in Roswell, GA. A second memorial gathering will be held at a later date in Paris, Kentucky.
In lieu of flowers, the family requests contributions to Best Friends Animal Society, Morris Animal Foundation, World Wildlife Fund or a worthy animal rescue group of your choice.