184TH MEETING BETWEEN THE CROSS-TOWN RIVALS – Bourbon senior Mukonkole “KoKo” Lukonga, along with Paris senior Caleb Johnson got things started on rivalry night inside Earl Redwine Gym. Bourbon knocked off the Greyhounds for the fourth straight time, 81-73. The win helped the Colonels extend their overall series lead to 94-90. Bourbon held a 90-76 edge at one time, before Paris won 14 straight to get it even.

PARIS, KY – When the Paris Greyhounds and the Bourbon County Colonels met back on December 13th at the Kentucky Bank Shootout inside Russ Day Gym, Coach Lamont Campbell’s squad, ranked No.1 in the 10th Region in nearly every poll, blew past Coach Terence Brooks’ Hounds 75-31. So, when the two teams met again at Paris last Saturday night, many were expecting the same results, although somebody forgot to tell that to the Greyhounds.

Freshly off a tough loss at the hands of Montgomery County and Mason County, the Hounds had the tough task of just keeping the game from getting to a running clock, especially after the Colonels had just knocked off George Rogers Clark for the first time in 18 years (34 straight losses), before suffering a tough loss at Campbell County two days prior to their cross-town matchup.

Unlike the first time around when the Colonels led from start to finish, this time, it was Brooks’ Hounds that made the early noise before Campbell’s crew, the good team they are, got it together to walk out of Earl E. Redwine gym with the 81-73 victory over a Paris team that just wouldn’t go away.

With the win, the Colonels improved to 21-5 on the season but more importantly, they tied GRC for the top seed in the district with a 5-1 record. The Hounds dropped to 8-15 on the year and 0-6 in district play. Brooks’ Hounds will play Clark or Bourbon in the upcoming district tournament in two weeks, depending on who wins the coin toss in tomorrow’s district meeting that will be held at George Rogers Clark. 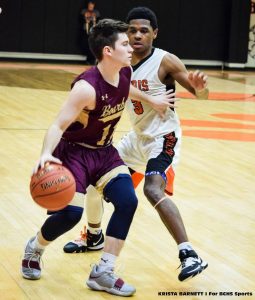 EXCUSE ME MR. CLARK BUT I NEED TO GET TO THE RACK – Bourbon County senior guard Wade Chapman used his off-arm to get some separation between him and defender Jamaun Clark during the cross-town rival game that was played Saturday evening inside Earl Redwine Gym.

finished with 5 points, 6 assists and 3 steals. Parker Estes scored 3 points and pulled down 5 rebounds. Mukonkole “KoKo” Lukonga rounded out their scoring with 2 points.

The win helped the Colonels extend their overall series lead to 94-90. Bourbon held a 90-76 edge at one time, before Paris won 14 straight to get it even.

Editor’s note: You can read the rest of this story inside Thursday’s (February 13th) print issue of the Bourbon County Citizen that you can find on a newsstand and in stores … as well as the Citizen office located at 123 West 8th Street. 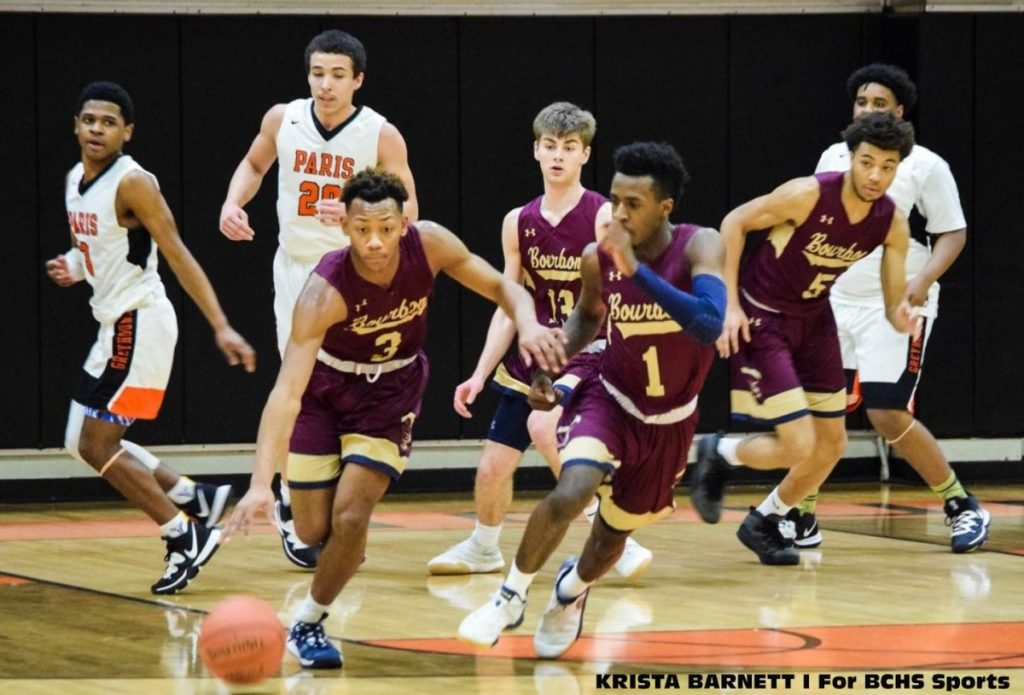 “AJ” ON HIS WAY – After securing the rebound, Colonel senior Amirion “AJ” Joyce pushed the ball up the court for his team during Bourbon’s victory over Paris Saturday night inside Earl Redwine Gym. AJ led all scorers with 26 points. Trailing on the play are Bourbon’s Nakyir “Scrap” Joyce (#1), Jack Huckabay (#13) and Nathan Mack (#5). Looking to chase Joyce down for Paris are Jamaun Clark, left, Caleb Johnson (#20) and Jalen Ransom, far right. 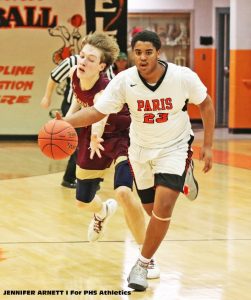 BEHIND YOU JAKARI – Paris’ freshman Jakari Ransom kept possession of the basketball for his team without knowing that Bourbon’s senior Brycen Collins was hot on his trail in hopes of securing a back tip. 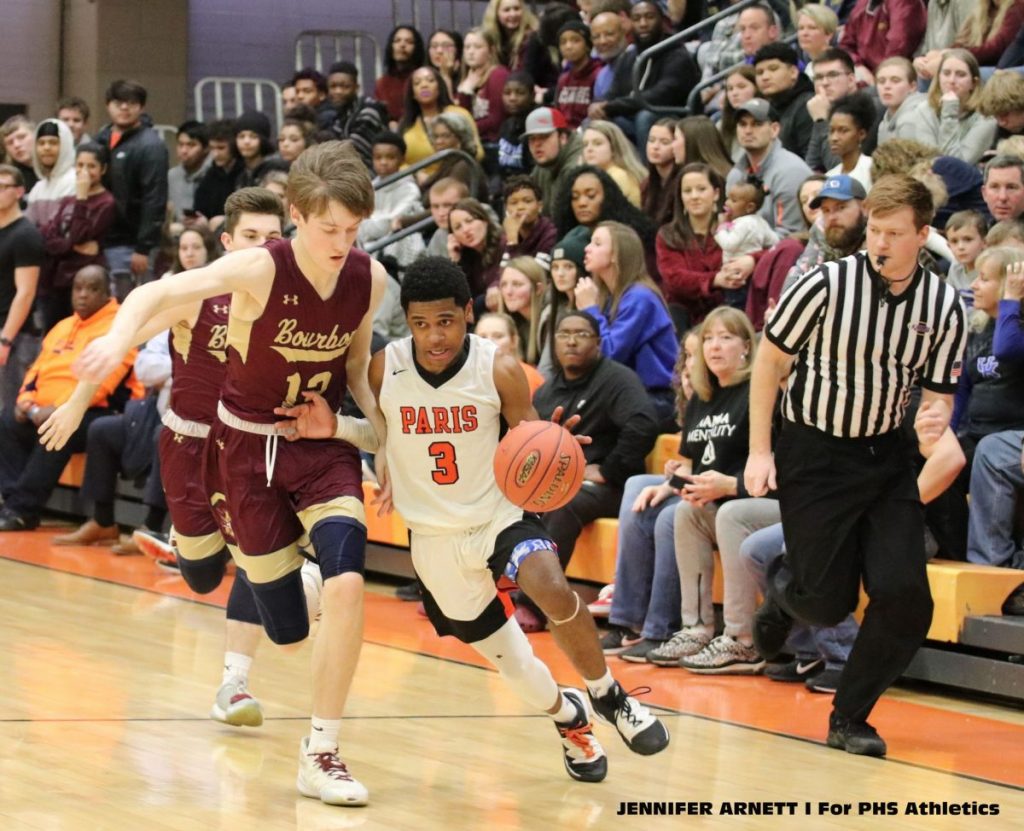 TRYING TO GET SOME FREEDOM – Greyhound senior Jamaun Clark brushed off Bourbon’s Brycen Collins, who tried his best to make sure that Clark’s attempt to get to the basket wouldn’t be easy. Clark did finish his evening with a team-high 20 points and 9 rebounds.