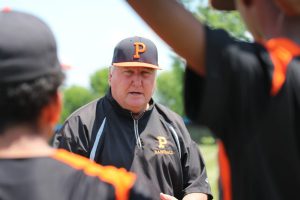 AD OF THE YEAR – Paris High School’s Athletic Director Cary Barr has been part of the 10th Region for the past 45 years after starting his coaching debut at MMI. Barr, a Paris graduate, is one of the most respectful individual a person will ever know, as he goes well beyond to help out any way he can, by taking on multiple tasks. He’s a mentor, coach and friend to all! JENNIFER ARNETT I For PHS Athletics

As A Coach, Administrator And Ambassador

PRESS RELEASE I For The Citizen

This award is chosen annually by the 16 Athletic Directors in the 10th Region. KHSADA President Matt Bell also notified Coach Barr that at the banquet there would be an A.D. of the Year in the State of Kentucky awarded to one of the 16 winners of the 16 regions in the state.

The KHSADA holds an annual State Conference that offers workshops and courses in leadership training for all the Athletic Directors in High School and Middle School in the state of Kentucky. A.D.’s can take courses in athletic administration and receive credit for them. Athletic Directors are offered membership to belong to the KHSADA and dues are paid annually.

“I am very honored to have received this award,” said Barr. “The 10th Region is the only region that I have coached and worked in. It is the best region in the state of Kentucky.” 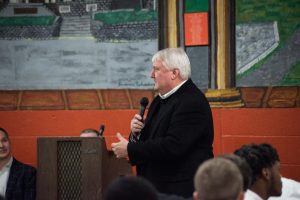 DESERVING HONOR FOR A GREAT MAN – Cary Barr is shown in this photo at this past season’s Greyhound football banquet talking to the team. Coach Barr was recently named the 2019-2020 10th Region Athletic Director of the Year. WHITNEY GRAY I Paris Schools Media Relations

EDITOR’S NOTE: You can read the entire story on Cary Barr in this week’s Bourbon County Citizen sports section that will come out in print or online, Thursday, April 9.