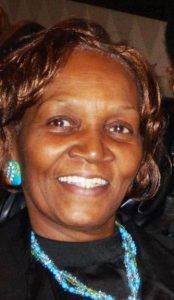 Cordia Marie Parker, 68, went to be with her Lord and Savior, April 11, 2020 at her home in Paris, KY.
A native of Paris, KY, she was the daughter of the late Joseph Henry and Argerta Mae Booker Parker.  She was a retired switch board operator and ward secretary at the Saint Joseph Hospital, Lexington, KY, where she worked for over 31 years.  Cordia was a devout member of the Shorter Chapel AME, Paris, KY and loved her family and church family very much.
She is survived by one daughter, Kristen Christopher; one granddaughter, Jordaun Brooks; four brothers, Barry Parker, Joe Parker, Rodney (Elvira) Parker and Leonard Parker; seven sisters, Katherine Parker, Helen Murphy, Rebecca(George, Sr.) Hutchinson, Fadqa Shakir, Denise (Kenneth) Johnson, Suzette Lagree and Brenda Parker and a host of nieces, nephews, cousins, aunts and uncles.
The family has elected to hold a private service at Lusk-McFarland Funeral Home and a private burial at the Evergreen Memory Gardens for immediate family only in remembrance of Cordia Marie Parker.  Out of respect for the Governor’s request for no gatherings over 10 people, we want to do our part to respect all people of Kentucky as well as pay tribute to the beloved Ms. Parker.
There will be a memorial service held for family and friends at a later date.
The funeral arrangements were entrusted to the Lusk-McFarland Funeral Home, 1120 Main St., Paris, KY 40361.