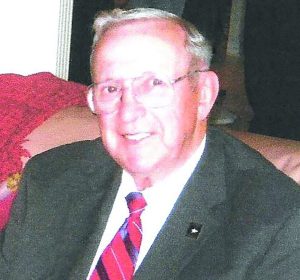 Virgil R. Hudnall passed away on April 11, 2020 at the age of 94.  Virgil was born in Paris, KY on April 1, 1926 to parents, William M. and Ruby Lillian (Frakes) Hudnall.  He was a graduate of Eastern Kentucky University, where he received his bachelor’s degree in Industrial Arts.  Upon graduation, he was commissioned into the US Army as a 2nd Lieutenant.  Virgil went on to serve his country honorably in the United States Army, retiring in 1976 at the rank of Lt. Colonel.  During his career in the Army, he proudly served in WWII, Korea and Vietnam. Following his military service, Virgil worked for the Department of Mental Health of Indiana as the Director of Data Processing, retiring from there in 1990.
Virgil was a member of the Veterans Memorial Chapel Church.  He was also a member of the American Legion, the Masonic Lodge # 495 in Blue Licks, KY and the Military Officers Association of America.  In his spare time, Virgil enjoyed camping and fishing with his family, bowling, playing cards and spending time with his family, especially the grandchildren. He also participated in the Senior Olympics in Polk County, Florida for many years.
Virgil is survived by his loving wife of 70 years, Myrtle T. (Hamm) Hudnall; children: William R. Hudnall (Rhonda), Richard M. Hudnall, Susan B. Hudnall, Scott B. Hudnall (Kelly) and Dean M. Hudnall (Jackie); 11 grandchildren: Jason, Joshua, Shane, Taylor, Jessica, Carly, Ian, Sara, Abigail, Rachel, and Elizabeth; 2 great-grandchildren: Paige and Brayden; one sister, Drusie Hudnall Miller; as well as many other loving extended family members and friends.
Virgil was preceded in death by his parents, William and Ruby; one brother, Lloyd; and four sisters: Louise, Nancye, Bettye, and Alma.
Graveside services will be private at Oaklawn Memorial Gardens Cemetery.
A memorial service will be held at a later date at Veterans Memorial Chapel (SE Corner of East 59th St. and Brooks Blvd., Indianapolis, IN).  Please continue to check his obituary page at FlannerBuchanan.com for updated service information.
In lieu of flowers, the family requests that memorial contributions be made in his memory to Riley’s Hospital for Children.