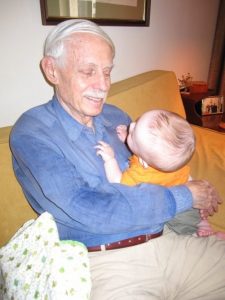 He was born March 1, 1934 in Jackson, MS to parents Edwin and Elizabeth Kirkpatrick. In a return to their home state, the Kirkpatrick family moved to Paris, KY in 1936.

He was a member of the Paris High School graduating class of 1953 and earned a BS in Business Administration in 1957 from Miami University, Oxford, OH, where he was a member of Phi Delta Theta fraternity. Thereafter, he pursued studies at the Wharton School of Finance. He was employed for three years by Reynolds Metal Company and 10 years by Auchinchloss, Parker, and Redpath, Washington, D.C.

Following his resignation from this firm, he served for some 30 years as a corporate finance consultant to various U.S. companies, partnerships, and venture capital firms, and certain foreign corporations.

In recent years he perhaps was best known for his January paper, in which his annual review and forecast of the U.S. investment climate was presented. He was a long-standing member of the Investment Management and Research Association and the University Club of Washington, D.C.

He is survived by his son, Christopher Kirkpatrick (Jennifer), and his grandson, Graham Kirkpatrick of Tucson, AZ, and his nephew, Rob Kirkpatrick, of Lexington, KY, and niece, Caroline Randolph, of Millersburg, KY.

A funeral service for family will be held at the Lexington Cemetery at a later date. www.hintonturner.com