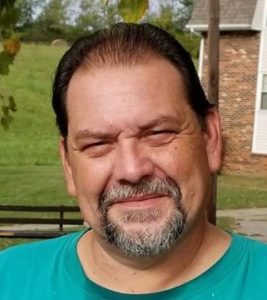 A devoted husband, father and grandfather, he had a heart of gold and always tried to make people laugh!  He was a avid music player that loved classic country.  He was an avid dog rescuer of Maggie, Daisy, Dudley and Jeffero.  He was also very fond of classic cars.  Every person that met him loved him.

Funeral services will be conducted at 1:00 PM Thursday May 21, 2020 at the Lusk-McFarland Funeral Home, 1120 Main St., Paris, KY by Rev. Robert Means.  Burial will follow in the Jacksonville, Cemetery, Paris, KY.

Visitation will be from 11:00 AM until the hour of service at the funeral home.

Memorials may take the form of contributions to the CHI Saint Joseph Health Cancer Center and the American Cancer Association.