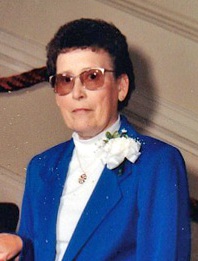 She was born in Ponotoc, OK, to the late William T. and Mary Bondurant Wallace.  She was a former employee of Douglas Aircraft during World War II, she also worked at Hansley Mills, Bluegrass Industries and Kentucky Textiles.

In addition to her husband and parents, she was also preceded in death by four brothers, Harlan, Virgil, Babe and Leslie; two sisters, Inez and Nora.

Funeral services will be conducted at 12:00 PM Wednesday July 15, 2020 at the Lusk-McFarland Funeral Home, 1120 Main St., Paris, KY by Jim Hardy.  Burial will be in the Evergreen Memory Gardens, Paris, KY.