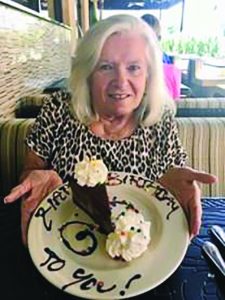 Carol Sue Rankin, 76, of Lexington Kentucky passed away June 22, 2020 at Lancaster General Hospital in Pennsylvania surrounded by her family. Carol was born in Paris, Kentucky and was a graduate of Bourbon County High School Class of 1962. She married Jerry Rankin in 1965 and together they traveled and lived all over the world during his military career with the United States Air Force. They later settled in Maryland where they raised their family. Carol worked for Andrews Federal Credit Union and later returned to Lexington and retired from food service in the Fayette County School System.
Carol loved to cook, garden and travel, especially between Kentucky and Pennsylvania to visit family.
She is survived by her four children, Brian Stortzum, Reba Larney, Sheila Ridgway and Pam Fliegel; 8 grandchildren, Taylor and Haley Larney, Laura Ashley Williamson(Ridgway), Annelise, Langston and Whitley Ridgway, and Ryan and Megan Fliegel; her brother, Jerry Riddell and wife Judy; and her aunt, Alfreda “Susie” Morton. Also preceding her in death was her husband Jerry Rankin and her mother and father Henry N. and Francis Grace Riddell. A Celebration of Life will be held by the family at a future date to honor Carol’s life.
Memorial contributions can be made to American Lung Association or St. Jude Children’s Research Hospital.