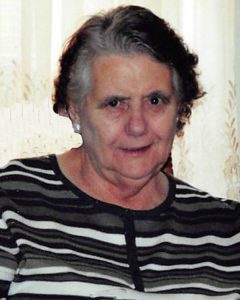 Claudia Mae Murphy Gross, widow of the late Carl Milton Gross, Sr., departed this life on Wednesday, August 12, 2020, having attained the age of 88 years. She was born in Pikeville, Kentucky on September 24, 1931, the daughter of the late John and Della Murphy, was a retired seamstress, having worked at Hansley Mill and Jockey, attended Paris Christian Church as well as Paris Church of the Nazarene.   In addition to her husband and parents, she was preceded in death by her brothers, Harvey Murphy, Clayton Murphy, Dover Murphy; sisters, Lucille Simpson, Lori Helvey; and a son, Carl Gross, Jr.

The funeral service for Claudia Mae Murphy Gross will be at 1:00 p.m. on Monday, August 17, 2020, at Hinton-Turner Funeral Home with Rev. Vernon Adams officiating.   Interment will follow in Paris Cemetery. Visitation will begin at 11:00 a.m. prior to the service. www.hintonturner.com