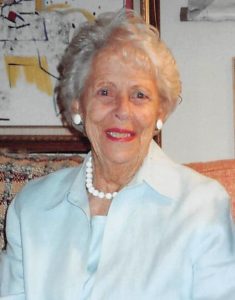 Emily Collins Jones Thompson, age 96, widow of James William Ferguson Thompson, Jr., died on Monday, August 17, 2020, at Bourbon Heights in Paris. A native of North Middletown, Kentucky, she was the daughter of Robert Graham Jones and Elizabeth Dudley Andrews Jones, was a graduate of North Middletown High School and the University of Kentucky where she was a member of Delta Delta Delta. She was continually active in the community and served on the board of Kate McClintock Home, Bourbon County Red Cross, Bourbon County Cancer Society, The University of Kentucky National Alumni Board, Friends of the Paris Library, and Historic Paris-Bourbon County. She was also a member of the First Christian Church where she served as a deacon, was a member of the Tinder Harris Circle, Paris Bourbon County Community Development Agency, The Garden Club of Kentucky, Inc. Headquarters Committee, and a member of the Colonial Daughters of the 17th Century.