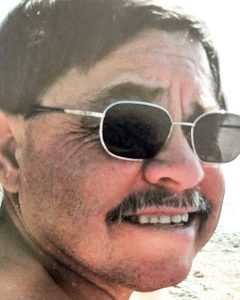 Paul Noel Hamilton was born December 20, 1956 and died on October 8, 2020. His time in this realm was marked by profound emotional and physical difficulty, but also intense joy.
When Paul was born, he did not get the chance to meet his biological mother. This caused him torment his entire life, believing himself responsible for the death of the mother he shared with 10 siblings. Now, this burden is lifted. (Merle and Paul are no doubt catching up now in Heaven, after having fought nobly in their battles.)
His father, Hobert Hamilton, asked Christine and Forrest Morris to help raise his infant son, as he had 10 other children to support. Paul referred to them as Mom and Dad, and they were his parents, even though he had a deep love and respect for Hobert. Soon, with his Type 1 Diabetes diagnosis at age 4, it was evident that Paul’s life was going to be even more challenging.
A Type-1 Diabetes survivor, Paul was accustomed to a life prioritizing his physical health. Paul was a recipient of a 50-year Joslin medal for his efforts, which he proudly accepted. He developed habits and talents for survival, with the help of his wife of 40 years, Sandy. He accounted for every calorie and carbohydrate meticulously, because his life depended on it. At the same time, he felt overwhelming guilt and worry for indulgences most of us take for granted. He could not celebrate birthdays with cake and ice cream, without also maintaining strict balance in insulin intake. This discipline allowed him to excel at many other hobbies.
He loved welding and the precision needed to create machine parts, and took pride in making each piece perfect. He loved cars and motorcycles, at one point calculating that he’d owned over 20 vehicles in his lifetime. Among his favorites were his Trans- Am, which he raced along Kentucky’s interstates and parkways. Paul loved the thrill of speeding along the road.
He constructed his own house from reclaimed logs he cut (before it was cool), he hunted with a bow, and was generally very good at most things he tried. He hated how his body gave him new limitations with each passing year. This was his main challenge to overcome in his passion projects.
Paul nurtured his abundant faith in God through his membership at the Headquarters United Methodist Church, where he had been active in the United Methodist Men. He also ministered to others through his dedicated service as a representative of Gideon’s International.
Despite all the problems and challenges he faced, Paul was an optimist. He created a future for himself and his family. He lived as if he would grow to a very old age. He fell in love, and out of that love created two daughters. He raised them to be thoughtful, kind, and to value curiosity and intelligence. He was so proud of his granddaughter and had high hopes for her future, which we survivors share. His love for Sandy deepened as they grew older and more refined together. Their lives became irreversibly entwined, and remain so.
We are privileged to have walked this earth and to have shared these experiences (good and bad) with the man we called our son, brother, father, friend, and soulmate.
He has gone to be with many loved ones. He made many friends in his life, some who are still here, and others who he’s gone to meet.
Paul was a loving and caring man, but also a jokester. He was known for his crab impression (Ka-dic! Ka-dic!) and silly sense of humor, to the delight of his wife, friends, daughters, and granddaughter especially. “May the bird of paradise fly up your nose, “ he often quoted.
He is survived by his wife Sandy Foster Hamilton; 2 daughters, Rebecca (Eric) House and Jessica (Stanley) Paulauskas; his beloved granddaughter Mia Noelle House; 2 brothers Mitchell (Karen) Hamilton & Bobby (Leatha) Feeback; and 6 sisters: Helen Carol (June) Small, Linda (Jerry) Wright, Lois Mitchell (Layne Hollar), Janice Robertson , Phyllis Malone and Mary Jo (Doug) McCord.
He was preceded in death by his parents, Hobert & Merle Hamilton and Forrest & Christine Morris; 5 brothers: Don Wilson, Byron Lee, Edwin Earl & Clifton Hobert Hamilton and Donnie Gene Feeback; and 2 sisters, Mary Ethyl Hunt and Sandra Jean Jones.
Services were conducted at 2:00 P.M. Tuesday, October 13, 2020 at Mathers-Gaunce Funeral Home by Minister April Gray Jolly with burial following in the Rose Hill Cemetery.
Paul’s nieces and nephews will serve as casketbearers.
Visitation was  from 12:00 Noon Tuesday until the time of service.
We must acknowledge the exceptional care he received from his providers: Dr. Raymond Reynolds, Dr. Derek Adams, Dr. Jon Webb, and all the nursing staff at Davita Dialysis.
Charitable donations may be made in Paul’s memory to the following organization:
Barnstable-Brown Diabetes Center, UK HealthCare Office of Philanthropy, P.O. Box 34184, Lexington, KY 40588