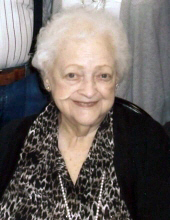 A native of Paris, KY, she was the daughter of the late John Russell and Maude Bell McCord Farris.  She worked at McAlpin’s Department Store, was a homemaker and also a bookkeeper for Williams Radio, TV Sales and Service.  She was a member of the First Christian Church, Paris.

In addition to her husband and parents, she was preceded in death by one son, Robert Williams; one son-in-law, Mike Leach; one sister, Carrie Carpenter and one brother, Olla Foster Farris.

Funeral services will be conducted at a later date.