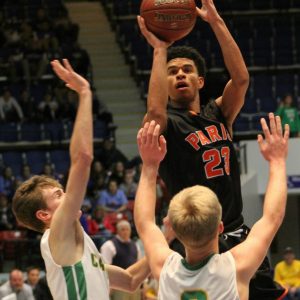 Twenty-one-year-old Jekobi Wells of Lexington was shot and killed at the intersection of Williams and Marshall streets in Paris on Monday, December 21.
Detective Earl Hatter of the Paris Police Department said that the incident occurred at 5:39 p.m. Local law enforcement responded to a call for medical and determined that a shooting had occurred.

Paris police said neighbors found Wells lying on Williams Street bleeding after stumbling there from around the corner. They say witnesses said Wells got out of a car with two young men in it. It’s not clear where or how he was shot.

Neighbors administered CPR until medics arrived. Police said the two men who were with Wells in the vehicle left the scene.
Wells was transported to Bourbon Community Hospital, where he succumbed to his injuries. A former Paris resident and a 2017 graduate of Paris High School, Wells was a celebrated basketball player for the Greyhounds.
The investigation is ongoing, and no suspects have been named. Any person with information about the case has is asked to call the PPD at 859-987-2100 extension 4.
The Citizen will have more information as it becomes available on our webpage, www.bourboncountycitizen.com.