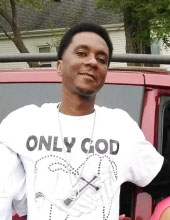 JoShua Charles Ottis Jackson, 38, died Friday, March 12, 2021 at the Bourbon Community Hospital, Paris, KY.
A native of Dayton, Ohio, he was the son of Daylene F. Baker Jackson of Paris, KY and Charles Ottis Jackson of Dayton, Ohio. He loved football and baseball and was an avid Duke fan. He also loved to go fishing and to cook. He was a member of Seventh Street Christian Church, Paris, KY and a graduate of Paris High School where he played football and baseball.
In addition to his parents, he is survived by four children, Zion Jackson, Zavier Jackson, Sanaa Jackson and Akeelah Jackson; two nephews, Julius Gregory and Ja’Brel Jackson; sisters, Antoinette Jackson and TyShawna Jackson; one uncle, DeWayne Baker; ex-wife, Rowena Crooks; girlfriend, Julie Edwards and a host of family and friends.
Funeral services will be conducted at 3:00 p.m., Friday, March 19, 2021, at the Seventh Street Christian Church, 122 West 7th Street, Paris, KY by Rev. William Garr.
Visitation will be from 1:00 p.m., until the time of service on Friday, March 19, at the church.
Everyone please wear a mask during the visitation and funeral.
Memorials may take the form of contributions to Lusk-McFarland Funeral Home to assist the family in paying for the funeral.
Pallbearers will be Mark Young, Zion Jackson, Zavier Jackson, Julius Gregory, Mike Jackson and Andre Gregory.
The funeral arrangements were entrusted to the Lusk-McFarland Funeral Home, 1120 Main St., Paris, KY.
The online guestbook is at www.Lusk-McFarland.com and a 24 hour funeral information line can be reached by calling 859-987-4387.