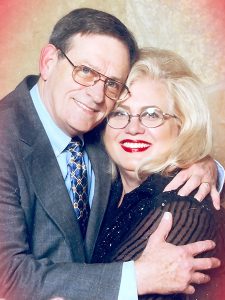 Lahonda Fugate passed away on April 22, 2020, in San Diego, CA. She was born in Tulsa, OK, on November 14, 1946, and moved to Hollywood, FL, with her family after high school. She met Ben Fugate in Florida in the summer of 1967.
Lewis “Benny” Fugate, Jr. passed away February 3, 2021, in San Diego, CA. He was born October 14, 1941, in Paris, KY. He graduated Paris High School in 1959, and from Eastern Kentucky University in 1963. After college he commissioned into the US Army. As a Huey helicopter pilot in Vietnam from 1964 to 1966, he was awarded 13 Air Medals, the Bronze Star and a Purple Heart. After returning from Vietnam, he moved to Florida where he met Lahonda in the summer of 1967.
Ben and Lahonda began their life together and married September 2, 1967. Ben’s career in the insurance industry had the couple moving every few years as he promoted. In 1970, they became parents to Lewis Benjamin Fugate III and four years later they had their daughter Heather Renee. In 1984, the family moved to San Diego, CA.
After leaving the insurance industry, Ben became the owner of Rancho Engraving, Inc. an awards and engraving business. Lahonda was the estate manager for a family in Rancho Santa Fe for over 15 years. Always the supportive parents, Lahonda was team mom for her children’s football, basketball, cheerleading and softball teams. She became PTA President when her children attended Mt. Carmel High School. Family was everything to Ben and Lahonda. They were so proud of their son who worked hard in the family business, and of their daughter who became a successful background investigator. In 2004, they became grandparents to Christian Lewis. Nothing gave them more joy than to watch him grow up. Even as their health declined, they still enjoyed attending Christian’s baseball games.
Lahonda and Ben are survived by their children, Ben and Heather, their grandson Christian, niece Rebecca, Lahonda’s brother John Parks and many wonderful friends who miss them dearly.
A joint memorial service for Benny and Lahonda will be held 11:00 a.m., Thursday, April 22, 2021, at the Paris Cemetery with military honors.