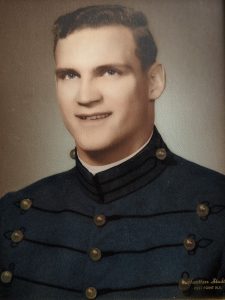 Joseph Frank Mance passed away in his home at Finnegan’s Run Estate, in Paris, Kentucky after a long and valiant battle with metastatic lung cancer related to Agent Orange exposure during his service in Vietnam. Joe is survived by his wife Rebecca, son Joseph Andrew Mance and brother Carl Mance, Jr. Born in Pittsburg, PA when Joe was a child, his family moved to Titusville, Florida where he grew up and his father worked at Kennedy Space Center. Joe was especially dedicated to his mother Mildred Mance.
Joe was accepted in the United States Military Academy at West Point where he obtained a mechanical engineering degree and upon graduating served as a Captain and Company Commander for a tank company in Vietnam (motto: “Have Guns, Will Travel”). He was awarded four Bronze Stars as well as other honors for his service.
Joe dedicated his talents as an engineer for the service of his country in the development and production of some of the most sophisticated weapon systems in the world, to include Block III Cruise Missile, Dragon antitank missile, SMAW antitank missile and the Hydra 70 rocket. He met and married his wife Rebecca while working at McDonell Douglas, they were married for nearly 34 beautiful years and enjoyed travel, adventure, and a beautiful life with son Joseph.
Before his illness, Joe worked for the Department of Defense at the GE Facility in Cincinnati, Ohio and was instrumental in the development of new generation of aircraft engines for both military and commercial use.
Joe was a man who embodied the West Point Code “Duty-Honor-Country” and no matter what he did in his life, he accomplished both his personal and professional affairs with honesty, integrity, passion, and dedication. To the end of his life, his concern was always for others.
There will be a memorial service at 6:00 PM Friday, May 28, 2021 at 642 Ardery Road, Paris, KY by Rick Snyder with visitation prior to the memorial service starting at 5 PM.
The arrangements were entrusted to the Lusk-McFarland Funeral Home, 1120 Main St., Paris, KY.
The online guestbook is at www.Lusk-McFarland.com and a 24 hour funeral information line can be reached by calling 859-987-4387.
A memorial page has been set up for friends and family to visit: josephfrankmance.com