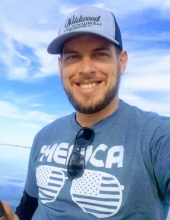 Jeremy Kendal Barton, beloved fiancé, son, brother, brother-in-law, grandson, nephew, cousin and friend to many passed away at the age of 35 on Wednesday, May 19, 2021.

Jeremy was passionate about his job at TransMed Care, LLC, where he brought his lighthearted and humorous spirit to his position as crew leader doing long distance non-emergency patient transports receiving many praising reviews.

He was also passionate about mountain climbing having climbed many with his latest attempt of Mount Whitney. He said it kicked his butt, but he was determined to succeed and had plans to return for a second attempt.

Jeremy having his own personal struggle with mental health, suicide and drug addiction, was also passionate about bringing awareness to these issues, and openly shared his struggles through videos, facebook, public speaking, designing T-shirts and hats, and by simply just opening his heart to lift others in their own struggles.

Jeremy lived a life that held nothing back and he touched many lives with his openness, kind heart and positive energy. He lived his life and he encouraged all to live a life outside of your comfort zone. Jeremy, your presence will be missed beyond measure, but your light and spirit will live among us forever and the memories of you we’ll hold on to dearly.

Funeral services will be conducted at 1:00 PM Tuesday, June 1, 2021 at Lusk-McFarland Funeral Home, 1120 Main St., Paris, KY. Burial will be in the Carlisle Cemetery.

Visitation will be from 11:00 AM until the time of service on Tuesday, June 1st at the funeral home.