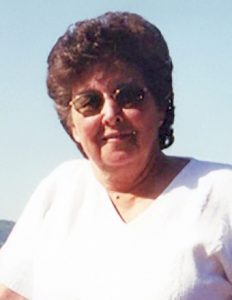 On June 13, 2021, our mother, Lake Spencer McCarty, changed her address to the golden streets of Heaven to be with our sweet Jesus. She was the widow of the late Kenneth McCarty and was born in Mt. Sterling, KY on November 27, 1935 to the late Jim and Stella Jones Spencer.
She is survived by her three children, Kennie (Maryjane) McCarty, Stacie McCarty, a very special friend Sherri Cheek and Lisa Gail Harp (Jerry) who preceded her in death on December 24, 2019. She said he will be the first person she will see, waiting at those pearly gates for her, they had such a special relationship. She has two grandsons, Jeremy Clay Harp (Cinny) and Mason Wyatt McCarty (Alicia), one granddaughter, Destinee Clark, three great granddaughters, Katie harp, Sophia McCarty and Maddie McCarty; one sister, Lela Fischer (Dick); special friend, Charlotte Stone and a host of nieces, nephews, cousins and good friends who she loved very much, too many to mention, for fear of accidently leaving someone out.
In addition to her husband, parents and son-in-law, she was also preceded in death by one brother, Dave Spencer; three sisters, Laura Cornett (Clayton), Mabel…better known a “Nanny” (John) Spence and Evelyn McCullum (Hubert).
Our mother has been a child of God for many years. She, from time to time, talked about wanting to do missionary work. She had never gone on a ladies retreat with our church before, not sure of the exact date, maybe mid eighties, she did go to the retreat. The guest speaker was Roma Lee, a missionary herself, who spoke on mission trips! After that weekend she spoke with Roma Lee often and went on her first mission trip! So…Mom had never flown before, ever. We took her to the Cincinnati Airport, she boarded the plane, oh did I mention…not just her first plane ride, but, she flew out of the country to Lima, Peru !! She had a wonderful experience, she chose to support a young lady that lived there, faithfully every month sending her money for her needs, we call her “our sister, Maria”. Mom and Maria became very close, writing to each other. Mom went back to Lima the next year and much to her surprise, and Maria’s, she got to meet her, spend a whole day with her, took her shopping, out to eat, walking and talking the entire day. It is unusual that you actually get to meet the child you sponsor, what a blessing for both of them. Maria is now a doctor in Lima, Peru, she credits mom for helping her be successful.
Mom went on several other mission trips to other countries, she loved each and every trip. She had a lot of love to give and love is what the people needed. Really, that is what we all need, LOVE, right? So may God bless each and everyone.
The funeral service will be conducted at 11:00 a.m., Thursday, June 17, 2021, at the Lusk-McFarland Funeral Home, 1120 Main St., Paris, KY. Rev. Dr. Morgan Gilkey will be in charge of conducting and preaching the word of God and most likely will share a few stories and her funeral service. Burial will follow in the Clintonville Cemetery.
Visitation will be from 5-8 p.m., Wednesday, June 16, 2021, at the funeral home.
Pallbearers will be Jeremy Harp, Mason McCarty, Destinee Clark, Mike Kendall, Steve Cornett and Jamey Stone.
Honorary pallbearers will be Larry Spence, Tom Fischer and John Spence, Jr.
The family would like to thank all of her medical team that took very good care for her over the years.
The funeral arrangements were entrusted to the Lusk-McFarland Funeral Home, 1120 Main St., Paris, KY.
The online guestbook is at www.Lusk-McFarland.com and a 24 hour funeral information line can be reached by calling 859-987-4387.