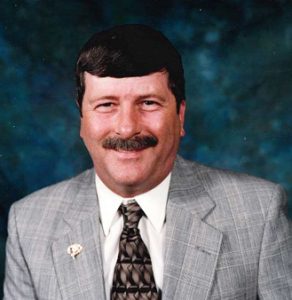 Billy Wayne Roy, age 65, of Lexington, KY, passed from this life unexpectedly on Sunday, July 25, 2021, at his residence.
He was born on January 13, 1956, in the old Somerset City Hospital, the son of Mary Mae George and the late Cecil Herman Roy. After graduating high school, Billy served his country during the Gulf War Era with three years of dedicated service and twenty years in the Army Reserves as a Sargent. He was employed as a manager with the Kentucky Fried Chicken Company and managed the Versailles KFC for a number of years. He was of the Baptist Faith and a member of the Cedar Point Baptist Church. Billy enjoyed motorcycle riding, jet skis and vacations especially at the Oceans. He was an avid U.K. Basketball fan. Perhaps, his greatest joy was spending time with his family and friends. He also enjoyed gardening, farm work and loved his animals”. Billy was a kind hearted, loving and jovial person, his generosity extended to not only his family but to anyone who needed a helping hand. He will be sadly missed by those who knew and loved him.
Along with his father, he is preceded in death by a nephew; Troy Conn, niece; Angel Rose Roy, a sister-in-law; Becky Roy, his maternal grandparents: Ruben and Lula George and his paternal grandparents; William Homer Roy and Vernola Roy.
He leaves behind to cherish his memory, his beloved daughter; Tonia (Rob) Howell of Cynthiana, three brothers; Eugene Roy of Paris, Roger (Billie Jean) Roy of Richmond, and Ricky Roy of Lexington, a sister; Sandy (Billy) Conn of Winchester, two grandchildren; Robee Maria Howell and Danielle Filer, nieces and nephews; Shawn (Cassie) Roy of Berea, Kentucky, Samantha (Justin) Brown of Paris, Brittany Conn of New York and Tiffany Conn of Winchester, Kentucky, several aunts, uncles and a host of other relatives and friends.
Visitation was from 6 p.m. to 8 p.m., on Thursday, July 29, 2021, in the Chapel of the Nancy Funeral Home.
The funeral services were held at 1:00 p.m., on Friday, July 30, 2021, in the Funeral Home Chapel with Pastor Patrick Patterson officiating, interment was in the Cedar Pointe Cemetery.
Military Honors were presented by the American Legion Post #38.
Active pallbearers were Tilden Weddle, Bruce Weddle, David Tucker, Tracey McDavid, James Terry Sullivan and Shawn Roy. Honorary Pallbearers were Gene Roy, Roger Roy, Billy Conn, Ricky Roy, Rob Howell, Justin Brown, Gayle and Betty Jane Roy, Anna Faye Wilkerson, Creola and August Johnson and Mary Rose Roy.
You may offer condolences and sign the online register at www.somersetundertaking.com
Somerset Undertaking Company is entrusted with the arrangements for Mr. Billy Wayne Roy.