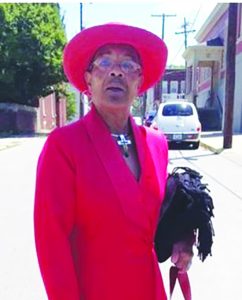 She was born in Paris, KY, to the late Cordelia and Clara Mae Gust Parker. She was a retired Dietary Manager at the old Bourbon County Hospital and later work as a caterer and was a member of the 7th St. Christian Church, Paris, KY.

In addition to her parents, she was also preceded in death by four siblings, Marvin Parker, Elwood Parker, Claude Parker and Christine Parker.

There are no services planned.