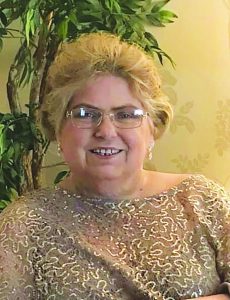 Betty Ann Horne Watson, 56, wife of William Blair “Billy” Watson, died Sunday, August 29, 2021, at her home in Paris, KY.
A native of Marion, OH, she was the daughter of Norma Lee Ulery Horne and the late Robert Lendell Horne. She was a member of the Rockhouse Freewill Baptist Church. She graduated in 1983, from Johnson Central High School where she participated in the marching band all 4 years, as well as concert band, was a member of the Student Council for one year and won the Woody Estep Award for Excellence in Mathematics. She went on to earn her Bachelor’s Degree in Mathematics from Eastern Kentucky University where she was a member of Kappa Delta Pi –International Honor Society for Education, then earned her Master’s of Education Degree from Morehead State University in 1997.
She was a mathematics teacher at Johnson Central High School in Paintsville, KY, for 27 years where she became the chair of the Mathematics Department. She was the cheerleading sponsor for 2 years and the academic coach for 3 years. She continued to teach for 3 ½ more years at Harrison County High School until her 2nd cancer diagnosis. Total years taught at time of retirement was 30 ½ years. Betty returned to education as a substitute teacher in the Bourbon County School System at the High School level as a long term substitute in the Mathematics Department and stayed for 3 years.
Betty is listed in Who’s Who Among American teachers, Who’s Who Among American Women, named the Secretary of EKCTM-East Kentucky Council of Teachers of Mathematics, member of EKCTM, KCTM-Kentucky Council of Teachers of Mathematics and NCTM-National Council of Teachers of Mathematics, was the recipient of the Distinguished Educator Award from EKCTM, a recipient of the Community Hero Award on behalf of the AmeriCorps program, a Paris Kiwanis Board Member, an Honorary Kentucky Colonel and a 2021 inductee into the Johnson Central Hall of Fame.
In addition to her mom and husband, she is survived by two daughters, Kasi Paige Watson and Adrian Blair (Isaiah) Railey; three brothers, Robert Lendell Horne, Jr., Ralph Edward Horne and William David (Teresa) Horne; one sister, Sandra Faye (Jonathan) Blevins; several nieces, nephews and cousins; mother-in-law, Pamela Mae Eades (James Robert III) Rice and step mother-in-law, Kathy Watson.
In addition to her father, she was preceded in death by her father-in-law, Donald Lloyd Watson.
Funeral services will be conducted at 1:00 p.m., Saturday, September 4, 2021, at the Jones-Preston Funeral Home, 807 South Mayo Trail, Paintsville, KY, by Lusk-McFarland Funeral Home of Paris, KY. Officiating the service will be Rick Stone of the First Freewill Baptist Church of Lexington, KY, and Malchom Ratliff, a member of the Rockhouse Freewill Baptist Church of Staffordsville, KY. Burial will be in the Lakeview Memorial Cemetery, Staffordsville, KY.
Visitation will be from 5-8 p.m., Thursday, September 2, 2021, at Lusk-McFarland Funeral Home, 1120 Main St., Paris, KY. There will be a second visitation from 5-8 p.m., Friday, September 3, 2021, at Jones-Preston Funeral Home, Paintsville, KY.
Pallbearers will be Chris Horne, Jonathan Blevins, Ed Horne, Bob Horne, David Horne, Bob Eades, Shane Pelfrey and James Rice III.
In lieu of flowers, donations may take the form of contributions to one of the following:
The American Cancer Society, 1504 College Way, Lexington, KY 40502.
Bluegrass Care Navigators, 1317 US-62, Cynthiana, KY 41031.
The Bourbon County High School Girls Basketball Team c/o Wendy Mahanna, 3341 Lexington Rd., Paris, KY 40361.
The funeral arrangements were entrusted to the Lusk-McFarland Funeral Home, 1120 Main St., Paris, KY.
The online guestbook is at www.Lusk-McFarland.com and a 24 hour funeral information line can be reached by calling 859-987-4387.