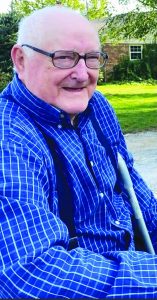 He attended and graduated from Millersburg Military Institute before serving in the U.S. Army. During his career he worked and retired from IBM and went on to haul livestock and farm alongside his son and grandchildren. An avid sports fan and western movie enthusiast, he was never at a loss for a good joke or story. He never met a stranger, and lived his life as an honest, hardworking man dedicated to his family.