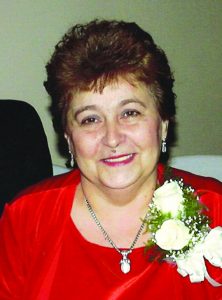 She was born in Paris, KY, to the late Claude Bruce and Betty Jean Jones Smith. She was a homemaker and loved to take care of her family. Patricia liked to garden and enjoyed her pets, a cat named Winston and a dog named Yogi.

In addition to her husband and parents, she was also preceded in death by two sisters, Mary Willoughby and Rita Adams.

Funeral services will be conducted at 5:00 p.m., Friday, September 24, 2021, at the Lusk-McFarland Funeral Home, 1120 Main St., Paris, KY, by Bro. Vernon Adams. Burial will follow in the Clintonville Cemetery.

Visitation will be from 3:00 p.m., until the hour of service at the funeral home.

The funeral arrangements were entrusted to the Lusk-McFarland Funeral Home, 1120 Main St., Paris, KY.
The online guestbook is at www.Lusk-McFarland.com and a 24 hour funeral information line can be reached by calling 859-987-4387.