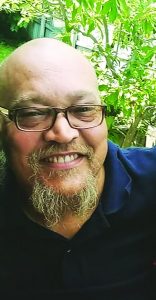 George Earnest (Earnie) Cunningham, age 64, died on September 21, 2021, in Lexington, KY.
George is survived by his wife Dianna Cunningham, his children Shayna Patrice Cunningham, Stefin Armon Cunningham, of San Diego, CA, Nathan Earnest Cunningham [and spouses Emrys and Niki Cunningham], of Richmond, KY, Natalie Elizabeth Cunningham, of Lexington, KY; his step-children Carrie Elliott, and Joshua Morrison, and his grandchildren Willie, James Alexander III, Champagne Alexander, Justus Alexander, Evelyn Cunningham, Patricia Cunningham, Joplin Willow Cunningham; Ashley Marshall, Alyssa Marshall, Ashton Morrison, McKenzie Morrison, and his five great-grandchildren, Koby Jr., Alexander, Kehlani Alexander, Genesis Alexander, Zane Alexander, and his step-great-grandson, Mason Marshall, all who he dearly loved.
He is preceded in death by his mother, Anna Vanhook, his brother, Paul Douglas Kenny, of Paris, and his step-grandson Landon Marshall.
George was born on December 26, in Paris, KY. He joined the Navy to respond to the conflict in Vietnam. Upon returning he attended the University of Kentucky where he studied psychology. He worked for the army depot, University of Kentucky, and the state as a livestock auditor before retiring to spend time cooking and looking after his family. He loved Sci-Fi and Westerns, Marilyn Monroe, and good bourbon. He could grow a tomato in a crack in the concrete and was proud of his skills in the kitchen. He was passionate about the education of his children, always saying he’d put an ‘extra wrinkle in their brains’ by introducing them to programs like CBS Sunday Morning and listening to NPR.
A memorial service is scheduled for Thursday, September 30, at 6:00 p.m., in the Loudon House courtyard, 209 Castlewood Dr., Lexington, KY 40505. All are welcome to attend and celebrate George’s life. Flowers and donations can be sent to Dianna Cunningham at 317 Bainbridge Dr., Unit T, Lexington, KY 40509.