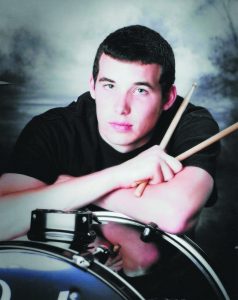 Michael Thomas Sykes, age 29, of Cynthiana, originally from Bourbon County, departed this life unexpectedly on Sunday, October 17, 2021. He was born in Lexington on May 2, 1992, the son of Joe Thomas Sykes (Jennifer) and Alison Lynn Cloyd Stanley (Kevin). He was a 2010, graduate of Bourbon County High School and received his associates degree at BCTC in Industrial Maintenance and Technology. He worked at CMWA as a robotics technician, a member of First Baptist Church, attended Spears Mill Baptist Church and loved hunting and computers, spelunking, and was a drummer in a rock band.
In addition to his father Joe and his wife Jennifer; mother Lynn and her husband Kevin; he is survived by two brothers, Joseph Sykes, Kevin Joshua (Kami) Cloyd; four sisters, Stephanie (Jonathan) Davis, Rebecca Ritchie, Brittney (Austin) Nichols, Rachel Elizabeth (Brent) Sundheimer; a grandfather Gene (Pap) Arnette Stanley; his beloved girlfriend of 6 years, Jamie Risenhoover; several aunts and uncles, great-aunt and uncles; cousins; nieces, and nephews; his dogs Butters and Scout, cat Gus; and his band Soulfade.
Michael was a treasured son, brother, uncle, cousin, soulmate, classmate, co-worker, bandmate and friend. He cherished his family, spending time playing Monopoly with his cousins and siblings, Magic with his little sister Becca, and the task that it was to keep his nieces and nephews entertained as they climbed on him any chance they got. He was a faithful friend who would do anything for anyone and to know him was to love him. His absence will be forever felt.
The funeral service for Michael Thomas Sykes will be at First Baptist Church on Thursday, October 21, 2021, at 11:00 a.m., with Rev. Ted Beam officiating. Pallbearers will be Josh Harpe, Brian Thompson, Jonathan Stanley, Bill Risenhoover, Tim Stanley, and Logan Cox. Visitation will be on Wednesday, October 20, 2021, from 5:00 p.m. – 8:00 p.m., at First Baptist Church in Paris.