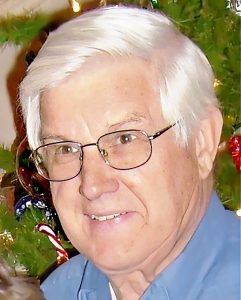 Ted Wiseman was born to Annabel Thompson Wiseman and Straude Edward Wiseman, Sr. on October 21, 1932, in Elmhurst, IL. However, he grew up on the family farm in southern Indiana and developed a life-long fascination with gasoline engines and tractors. He attended Union College in Barbourville, KY, and there met the love of his life and his wife of 70 years, Mollie Howard Wiseman.
Ted graduated from Georgetown College and was employed by Peoples Deposit Bank and Kentucky Bank for over thirty years. After retirement from Kentucky Bank, he enjoyed fifteen years of driving buses for Bluegrass Tours in Lexington. Ted was also active in numerous civic organizations and served as the Salvation Army representative for our community for many years. He was a charter member, in 1971, of the Central Kentucky Steam and Gas Engine Association, Inc. Ted restored many gasoline engines and tractors and he and one of his restored tractors appeared in the movie, “Seabiscuit”. Ted and Mollie also operated Wiseman’s Mill where they sold stone-ground cornmeal at many local festivals and shows. Ted left us with many wonderful memories of church and school trips, ball games, festivals, steam shows and craft fairs with Ted either driving or working hard and Mollie right by his side through it all.
He is survived by his son, Keith (Pam) Wiseman, his daughter, Suzanne (Kenny) Dungan, grandchildren, Matt Bales, Katie Bales, Mason (Nicole) Wiseman, Seth Wiseman, and Vesko Wiseman and great-granddaughter, Cecilia Wiseman.
A memorial service will be held at a later date.
Memorials may be sent to the Salvation Army or Hospice of the Bluegrass, Highway 62E, Cynthiana, KY 41031. www.hintonturner.com