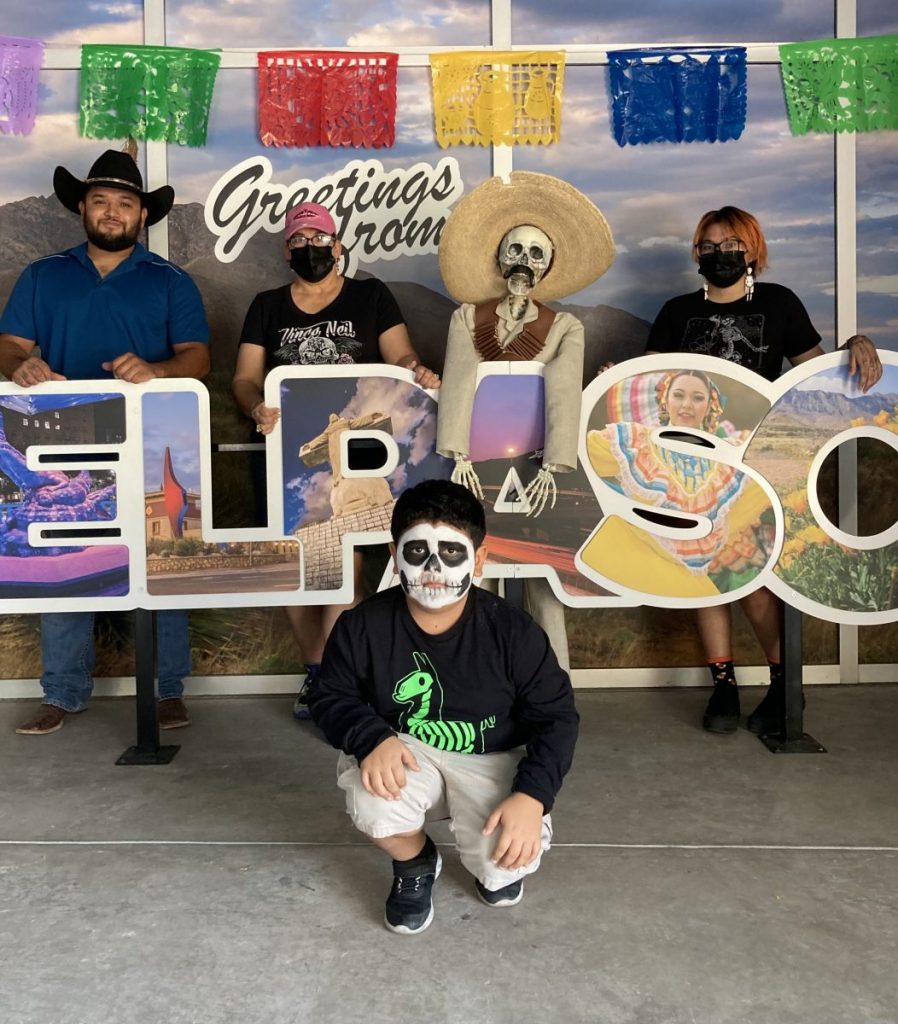 “GREETINGS FROM EL PASO!” On Oct. 31, Paris will host its first-ever “Dia de Los Muertos” celebration, at the Bourbon County Courthouse. Citizen reporter Pat Conley was in El Paso, Texas last weekend, to enjoy one of the largest such celebrations anywhere in the U.S. Shown here is young Jayden Corral, with his face painted like a skull. In the background are his father Ervey Guillen, his grandmother Peggy Corral and his mother Dani Corral, all of El Paso.

Mexican holiday to be celebrated Oct. 31 at Bourbon County Courthouse

Citizen reporter Pat Conley is in El Paso, Texas, working on a COVID-19 logistical support mission. In his off-duty time, he captured the following photos of the large-scale Dia de Los Muertos celebration which drew thousands to El Paso’s downtown.

When 31-year-old Sarah Paige Sturgeon (nee Roe) was a little girl in the Townsend Valley Road area of northern Bourbon County, never in a million years could she have reasonably envisioned herself ever orchestrating a community celebration of a Mexican traditional holiday commemorating the spirits of beloved family and friends. Right here in PKY!

But sometimes life is like a pinanta—you never know what you’re gonna get! And once young Sarah got to Bourbon County High School, turns out her favorite class was, you guessed it, Spanish…

Not just any Spanish class, however. It was one taught by her eventual mentor and #1 cheerleader, a Los Angeles native Latina by the name of Lydia Vance Lovell. An apt pupil, Sarah made the Spanish Honor Society before going on to UK in 2008, and majoring in, of course, Spanish.

WHAT IS “DIA DE LOS MUERTOS”?

“One thing it’s not, is a Mexican Halloween,” explains Chamber of Commerce Executive Director Lauren Biddle, one of Sarah’s BCHS classmates; both Sarah and Lauren are serving on the Dia de Los Muertos committee.

The tradition, which began in Mexico, is essentially a blend of Catholic influences—brought by the Spaniards—with ancient beliefs held by Aztecs and other indigenous cultures. It is celebrated in many of the 20 Spanish-speaking countries, and wherever else there are large Hispanic populations.

Biddle said she first learned of the beloved Mexican holiday from the highly acclaimed 2017 Disney children’s movie “Coco”. “The holiday is meant as a fun way to remember cherished family members and others who have passed on,” Biddle said in a phone interview last week. “It’s not a Halloween party, so we really do not want to see Halloween costumes at the event,” Lauren noted. 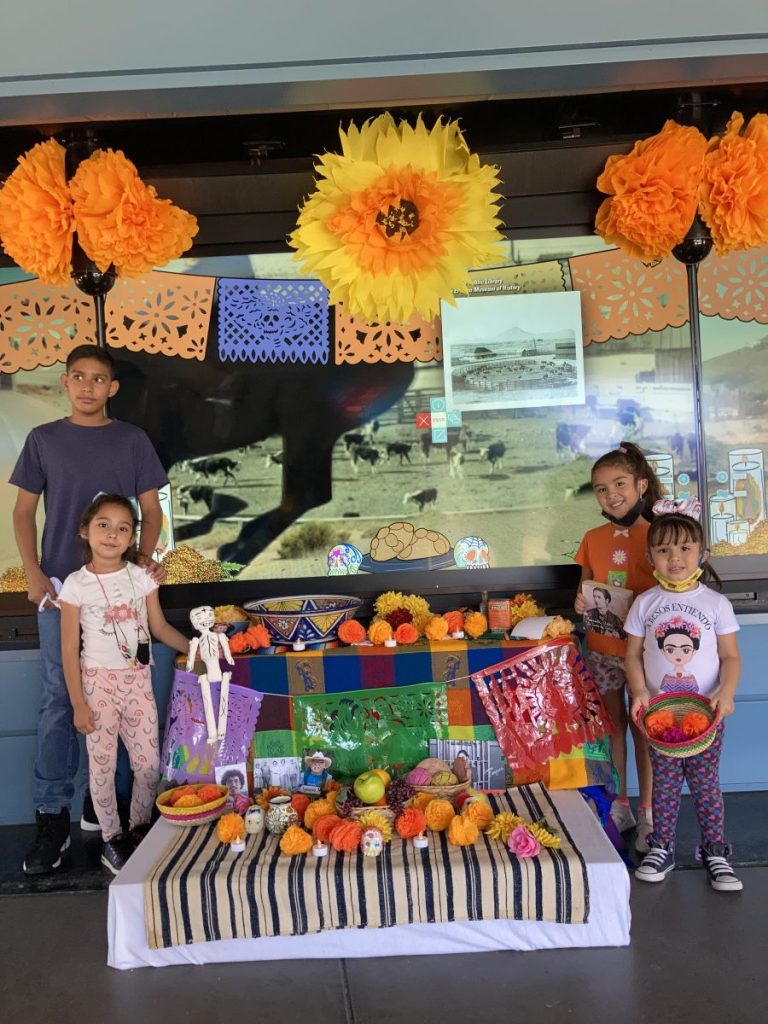 THE OFRENDA…Ofrendas are a type of altar, constructed to honor the spirits of beloved family and friends. Shown here at one of three ofrendas outside El Paso’s Museum of History are (from left) Kiara Bustamante, Jazibe Miranda and Bella Rivera, all of El Paso. Young and old alike enjoyed a full day of food, music, dance and a parade as part of El Paso’s extravagant “Dia de Los Muertos” festival last Saturday.

The centerpiece of a community’s Dia de Los Muertos celebration is a giant “ofrenda”, a fantastically decorated setting for various memorabilia associated with departed loved ones. Bourbon County’s ofrenda will be on the steps of the old Courthouse on Main Street. Accordingly, Hispanics and everyone else are warmly encouraged to bring framed photographs or other items associated with dearly departed friends and family. The items will be left on the steps through Nov. 1 and Nov. 2, traditionally observed as “All Saints Day” and “All Souls Day” by Anglican and Catholic churches worldwide.

Lydia Lovell taught Spanish for 27 years at BCHS. She introduced the practice of building an ofrenda to many of her classes over the years. And though many Mexican families create a small ofrenda in their own homes, Senora Lovell’s family did not keep that tradition. Nor did the family of Perico’s co-owner Lilia Lucero, but they did decorate—with candles and fresh flowers—ofrendas in the cemetery where she grew up. “We are from the pueblo of Sardinas in San Bernardo—that’s in the state of Durango, in northern Mexico,” she explained in a phone interview. Dia de Los Muertos is more celebrated in central and other parts of Mexico, Lilia explains. Lucero, who’s serving on the Courthouse celebration committee, hopes to see a large crowd of Hispanic and non-Hispanic alike on Oct. 31. This year both the Lovell and Lucero families will enjoy the tradition of creating an ofrenda within their homes.

According to Lauren Biddle, the Oct. 31 event will go “rain or shine”. There will be inflatables, crafts and games for the kids, and the Disney movie “Coco” will be shown outside. Several local Mexican restaurants are expected to set up booths, and alcohol will be available. Mexican music will be provided by DJ Ariel “Rel” Delgado of 1440 AM “Radio Vida”.

There is no admission fee for the event. Main Street will be blocked off near the Courthouse, to ensure the safety of young and old alike. “Dia de Los Muertos” t-shirts will be available for purchase at the event; check the “Café Americano” page on Facebook for details.

Sarah Paige Sturgeon has been “delighted” by the communitywide support she’s sensing for Dia de Los Muertos. She says all city and county schools have been contacted, including Bourbon Christian Academy, St. Mary School and The Y. Most are bringing decorations for the ofrenda, she said. 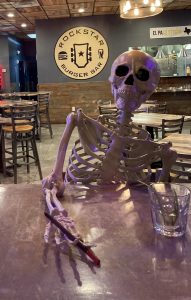 DYING FOR A DRINK…This dead gent stopped by for a cocktail and a smoke at Rockstar Burgers near San Jacinto Plaza in downtown El Paso.

Principal Miranda Chaplin said though there was a little bit of initial apprehension among some school families, “Once we explained the history and the intent, everybody is onboard. It’s (Dia de Los Muertos) not supposed to be creepy, it’s a beautiful remembrance of loved ones. We want our students to not only respect but appreciate various cultures, even if we don’t celebrate certain customs ourselves. Appreciation comes through knowledge,” Chaplin believes.

Nowadays Lydia Lovell teaches Spanish part-time at St. Mary School. “Dia de Los Muertos is supposed to be happy, and whimsical, not scary—we’re just remembering people from our past,” she explains to her students. “We’re celebrating a life, just like we do a birthday.”

“The Chamber of Commerce has a strong emphasis on promoting minority businesses, including the many local Hispanic businesses,” Biddle said. “I’m excited—this will be a merging of cultures. We’ve always worked to be inclusive, but this (Dia de Los Muertos) celebration will show it.”

According to Andrea Pompeii with Bourbon County’s Joint Planning Commission, 7.34% of Bourbon County’s population is Hispanic. “But that number’s likely higher, because of migrant and seasonal agricultural workers,” she explained. Sarah Paige Roe Sturgeon says 10% of those enrolled in Bourbon County Schools are Hispanic.

Regardless of the exact percentages, County Judge-Executive Mike Williams knows “Hispanics are a growing population in Bourbon County. We’ve been among the leaders statewide, for several years, in Hispanic population,” Williams said in a phone interview. “They’re Bourbon Countians now, part of our culture. Part of our heritage. So it’s very appropriate for us to be having this celebration—it’s exciting. I’ll be there. There could be a large crowd,” Williams concluded. 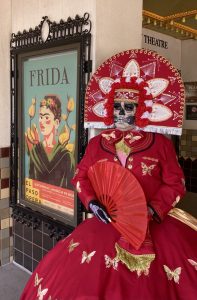 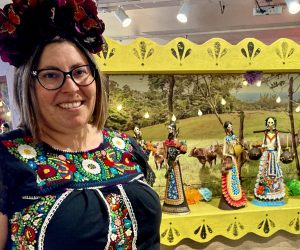