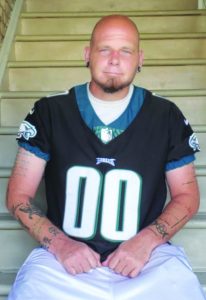 Joshua Clark Davis, 43, passed away Saturday, October 16, 2021, in Virginia Beach, VA. Josh was born January 9, 1978, to Terry and Suzanne Davis in Hopkinsville, KY. He spent most of his school years in Bourbon County, KY, and graduated from high school in Morgan County, KY; but considered Lexington, KY home.

Josh was preceded in death by his sister Amy Elizabeth Davis. In addition to his parents Terry and Suzanne, survivors include his brothers Jacob Davis and Michael (Oz) Davis, his fiancée Shawna and their daughters Amara, Ali and Raven. Nothing was more important to Josh than the time he was able to spend with his girls no matter what they were doing.

Josh battled addiction for years on both sides of the fight. He won lots of skirmishes of his own, assisted others with their fight while employed at a couple of rehab facilities and attended countless meetings attempting to help both himself and others. If Josh was your friend, he was there for you with most anything he could help with. During his long stretches of being clean, he tried his best to help you with the battles. He lost his war on drugs recently and now his fight is over.

Josh spent the last months of his life as a Credentialed Contributor, Intern, Stringer and Player Rep in the mix of all the startup professional football leagues. He fought hard to break into sports writing and loved what he was doing. He will be terribly missed by his friends and family, who will smile at their own personal memory of his presence.

There will be no funeral services, but memorial events being discussed. Memorial contributions to Recovery Organizations in your area would be appreciated.

Condolences may be left online at www.altmeyerfh.com