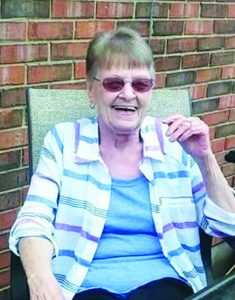 She was preceded in death by one brother, Charles Hedges; one sister, Rebecca Gaunce; two sons-in-law, Tim Whitaker and Rick Bramblett.

There will be no funeral services.

In lieu of flowers, the family has asked for donations to be made to the American Lung Association, 55 West Wacker Drive, Suite 1150 Chicago, IL 60601.