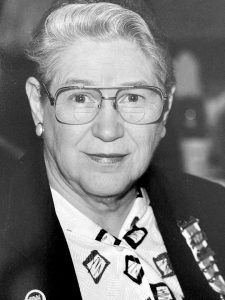 Jane Woodford Venable Brown, 89, of Clark County, passed away Wednesday, November 24, 2021, at her ancestral S.A.B. Woodford home. She was born on April 25, 1932, in Winchester, to the late Charles Sanford and Martha Fishback Venable.
She attended Winchester High School, Midway College, and graduated from the University of Kentucky with a degree in Home Economics followed by a Masters of Fine Arts degree in textiles from Cranbrook Academy of Arts in Bloomfield, MI. She was a member of Salem Presbyterian Church. Upon her graduation from Cranbrook, she took a position as Michigan State University home economist extension agent in Cadillac, MI. It was here that she married Ted Brown, who preceded her in death, along with her brother, John Oliver Venable, and her parents.
Upon her return to KY, from MI, in 1975, she took up farming with her brother John. They were breeders of purebred Angus cattle. Jane was a life-long learner, fascinated by a host of interests including textile and basket weaving, quilting, and traveling the world. She was an avid collector of antique furniture and tools, quilting fabrics, puzzles and books,. In their later years, she traveled the country with her brother John following the Midwest Tool Collectors, where they made many friends. She was a life-long admirer of quilts: she played with doll quilts her mother had made when she was a child, and once said there were very few nights in her life that she didn’t sleep under a quilt that one of relatives had made. This love of quilting led to her joining the Kentucky Heritage Quilt Society, and later of organizing the “Scrap Baggers” quilt group in Winchester and Clark County.
Her interest in genealogy led to her greatest passion: the Daughters of the American Revolution. She joined Hart Chapter of DAR in 1970, and served for 51 years. Jane was a descendant of Brigadier General William Woodford and Jacob Fishback, both of whom served valiantly in the American Revolution. Like her ancestors, Jane was steadfast in her service and embraced the DAR motto of “God, Home, and Country”. Her inimitable wit and humor charmed all the members of Hart Chapter, and the example of her tireless dedication was an example to follow. She served two terms as the Regent of Hart Chapter, became an Honorary Regent and spent several years as its Librarian. She also gave her time and energy to countless chairmanships and committees. A staunch supporter of Duncan Tavern, Kentucky’s DAR Headquarters, Jane spent many days in its kitchen preparing and serving luncheons, as well as receiving and cataloging precious artifacts for its museum. She was generous in supporting the maintenance and running of Duncan Tavern and encouraged this stewardship in Hart Chapter and all Kentucky Daughters. Jane supported many institutions through her service on boards that included the Hindman Settlement School, the Clark County Public Library, and Winchester Federal Savings Bank. She took an active interest in the formation of organizations that furthered the preservation of local history, such as the Bluegrass Heritage Museum and the Lower Howard’s Creek Nature and Heritage Preserve. She helped improve the lives of many women through her involvement and financial support of the New Opportunity School for Women in Berea, KY.
She is survived by her niece, Martha Huntington Venable Johnson, a great niece Ashley Woodford Johnson, and great nephew Nelson Hagan Johnson.
Funeral services will be Thursday, December 2, at 11:30 a.m., at the Rolan G. Taylor Funeral Home, 289 South Main Street, with Rev. John McCord presiding. The family will receive friends on Wednesday, December 1, from 4-6 p.m., at the funeral home. Burial will be in the Winchester Cemetery.
Serving as pallbearers will be: Dave Maples, Clayton Chamberlain, Hagan Johnson, Roy Johnson, Rex McCrary, Larry Stewart, John Pumphrey. Honorary pallbearers will be: Dana Maples, Fara Tyree, Will Hodgkin, Anne Willson, Martha Clare Sipple, Harry Enoch, and John Barry Sipple.
Contributions can be made to the Summer Reading Program with the Clark County Public Library, 370 South Burns Avenue, Winchester, KY 40391.