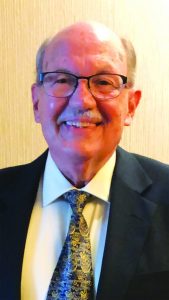 He was born November 13, 1937, to Alex Oscar and Esta Lee Griffith Knipp of Ashland, KY.

A graduate of Ashland High School and the University of Kentucky, Oscar’s career in business spanned 36 years. Many of those were spent in Cynthiana at Ladish and Bundy Tubing. Upon leaving Cynthiana, he became the Vice President of Manufacturing at Bundy’s corporate headquarters in Warren, MI.

Throughout his younger years, Oscar had a variety of interests, including bowling, softball and golf. He was also active in several church leadership and civic organizations. After his retirement, he enjoyed traveling, watching UK basketball and football games and spending time with his family.

A private family service will be held. Memorial contributions may be given to Bluegrass Care Navigators 1317 U.S. 62 Cynthiana, KY 41031.

Burial will take place at Evergreen Memory Gardens. Hinton Turner Funeral Home is in charge of the arrangements. www.hintonturner.com