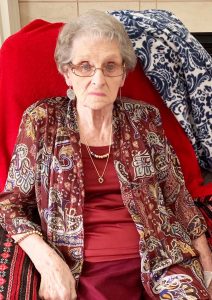 Barbara Howard Arnold, widow of Virgil E. Arnold, departed her earthly home in Paris, Kentucky, with her family by her side, having attained the age of 83 years.
Barbara was born on June 18, 1938, in Fleming County, the daughter of the late Silas P. and Amelia May Hamilton Howard, was a graduate of Bourbon County High School, and a member of First Church of God in Paris. In addition to her parents and her husband, she was preceded in death by her siblings, Edith Buzzard, Ruby DeAtley, Geneva Howard, Margaret Liggett, Thelma McCord, Frank Howard, Henry Howard, Orville Howard, Melvin Howard, and Paul Howard.

The funeral service for Barbara Howard Arnold was at 10:30 a.m. on Thursday, December 23, 2021, at First Church of God with Rev. Tim Pierce officiating. Interment followed in Paris cemetery with casket bearers being Larry Dunn, Larry Gene Howard, Charles Brandenburg, Dennis Liggett, Jimmy Insko, and Mark Prince. Visitation was on Wednesday, December 22, 2021, from 5:00 p.m. to 8:00 p.m. at the church.