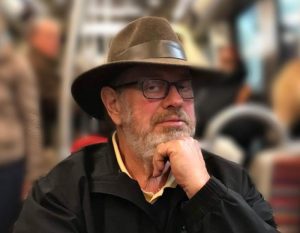 On a crystal clear night in late August of 1989, Henry and his family walked out on the dock at Cozy Harbor on Southport. After viewing the zillions of stars and smelling the salt air, Henry pledged that he would, someday, be a permanent part of this enchanted place. This was his first trip to Maine.

Henry Scott Wyatt was born in Paris, Kentucky where he grew up among horse farms, tobacco, and basketball mania. His father, George Wyatt, was a small contractor who often took other work to make ends meet. His mother, Jean Gloster Wyatt, had been one of the first women to graduate from the University of Kentucky Business School. She worked as the head bookkeeper at a small manufacturing plant. Although she did the work, she was never named comptroller—a slight that Henry often recalled. An adventurous boy, the youngest of three children, he rode his bike with his friends all over town. They played baseball in vacant lots and fished for crawdads. But it was a southern town that was tightly segregated and his childhood reflected those limitations.

Henry went to Bourbon County High School where he played the tuba in the band, managed the basketball team, and played football. He would play the first half of a game, change into his band uniform for the halftime show and then play the second half. After graduation in 1967, Henry enrolled at the University of Kentucky with a music scholarship, but he wanted to play football. The spring of his freshman year he tried out and made it as a walk-on, but it didn’t last long. He spent a bit too much time playing bridge in the student center and didn’t quite make the required GPA. Disappointed, he returned to Paris to look for work. After a series of manufacturing and hardware store jobs, he went to work for his father and built houses. He learned the construction trade and most importantly, the materials business. Brown and Epperson, a regional lumberyard, hired Henry to manage their Paris store.

Always a lover of sports, Henry became a referee of high school and small college football and basketball in central and eastern Kentucky. He loved to recount his many adventures on the court and field. As a teenager he had caddied at the local golf club; as a young adult he began a lifelong love of golf that followed wherever he lived. He also continued his passion for music, singing in the church choir and joining a community choir in Lexington, Kentucky. In the fall of 1981, he was chosen to be one of three tenors in an a capella group. While singing a Mozart piece, he fell for one of the sopranos, Margi Spratt. A year later they were married.
The couple moved to Lexington, renovated a small cottage in an historic neighborhood, and had two children, Theadora and Caroline. While Margi finished work on her doctorate, Henry began working for a national roofing manufacturer. In 1988, the young family moved to Pittsburgh where Margi joined the faculty of a regional university, and Henry worked for another manufacturer, covering parts of five states. On May 23, 1993, Henry’s life was changed forever when his car was hit by a logging truck in State College, Pennsylvania. Suffering life-threatening injuries, he underwent over thirty surgeries during the following decades. Unable to walk unassisted for several years, he decided to return to school. He majored in Art and Architectural History and graduated from the University of Pittsburgh in 1998.

In the fall of 1998, the family moved to Southport, Maine so Margi could work on a book. At the end of the yearlong sabbatical, they stayed while Henry completed requirements for a real estate license. He began working for Lewis and Pottle in Boothbay Harbor and then opened his own boutique agency on Southport. He retired from real estate in 2008.

There were many constants in Henry’s life, even in the face of physical pain and turmoil. He loved golf and belonged to clubs in Paris, Kentucky, Boothbay Harbor and Brunswick, Maine. After decades of playing, he finally hit a hole-in-one in 2017. He loved music, singing in church choirs and small groups in Kentucky, Pennsylvania, and Maine. He had a passion to help the less fortunate. Unassuming and modest, he did what he could to help others. He was president of the Paris Lions Club, belonged to Rotary in Paris and Boothbay Harbor. He helped raise money for the Southport Library and Habitat for Humanity, Seven Rivers Maine, and he served as chair of building committees for St. Peters, St. Paul’s, St. Andrew’s, and All Saints by the Sea. (Episcopal churches in Kentucky, Pennsylvania, and Maine.) He also loved politics and worked for a number of Democratic candidates in several states. He was on the Allegheny County (Pittsburgh) Pennsylvania and the Lincoln County Maine Committees and served on the Executive Committee of the Democratic Party of Maine for a brief time. And even though he belonged to both the Southport and Boothbay Harbor Yacht Clubs, he remained a terrible sailor.

Henry died at home on Southport Dec. 23, 2021 with family and dogs nearby. His wife, Margaret, and daughters, Thea (Los Angeles) and Caroline (Bordeaux, France) ask that if you desire, donations honoring Henry could be sent to Hospice Charity Care (helping those without resources or insurance) at MaineHealth.org. or the Southern Poverty Law Center at donate.splcenter.org. A private memorial service will be held at a future date.

Hall’s of Boothbay has care of the arrangements. To extend online condolences, please visit hallfuneralhomes.com