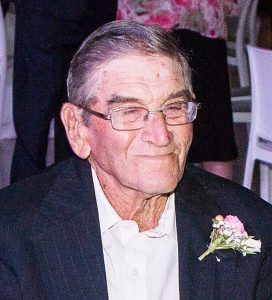 Wheeler Haggard Hay, widower of Mildred “Mickey” Frances Davis Hay, departed this life on Sunday, January 2, 2022, at his home surrounded by his loving family, having attained the age of 96 years.

Wheeler was born in Winchester, KY, the son of the late Edward Thomas and Margaret Haggard Hay, attended Oxford school, was a farmer, and member of Bedford Acres Christian Church, where he was a charter member, deacon, and former treasurer.

In addition to his parents and wife, he was preceded in death by his sister, Ada Wyles; three brothers, Carl, Billy, Gene Hay; and a daughter-in-law, Patti Hay.