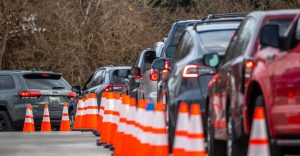 Demand for coronavirus tests was apparent Monday at a site in Lexington. (Photo by Ryan Hermens, Lexington Herald-Leader)

After two days of high case numbers and a record-setting positive-test rate, Gov. Andy Beshear says Kentucky is in an Omicron-variant surge.

“Folks, it’s clear Kentucky is now in a surge from Omicron. . . . This is the most contagious variant we’ve seen. Protect yourself and others: Get vaccinated and get a booster shot,” Beshear wrote on Facebook.

Kentucky reported 5,530 new coronavirus cases Wednesday, the second largest daily number of new cases of the pandemic, beaten only by the 5,742 reported Jan. 6, 2021. The seven-day rolling average rose to 2,832, which is 15% higher than Tuesday and 29% higher than two weeks ago.

The percentage of Kentuckians testing positive for the virus in the last seven days is the highest it’s been since tests became widely available early in the pandemic: 14.46%, a 1.85-percentage-point increase from Tuesday.

The three major Kentucky counties in the Cincinnati metropolitan area, Boone, Kenton and Campbell, are in the top 20, with rates of 75 to 64 per 100,000.

Officials in Louisville and Lexington sounded alarms yesterday as case levels and positive-test rates soared, and “Health officials said they expect to see an even higher rise in cases 10 to 14 days after any New Year’s parties,” Louisville’s WDRB reports.

Louisville Metro officials reported an “alarming increase” in cases, raising Jefferson County’s seven-day average of new cases to 1,742 per day. A week ago, it was 532. (Local and state reporting methodologies vary.)

The percentage of Jefferson County residents testing positive for the virus in the last seven days jumped to 19.5%, meaning that nearly one in five people who got tested were found to be infected with the virus. The figures do not include people who used in-home tests.

Tests are in high demand, and in-home tests are in short supply. Hartlage advised, “If you wake up feeling poorly, the safest thing is just to assume that you are positive.”

WDRB reports, “Area hospitals are also beginning to see an increase in Covid-19 patients. Dr. Steve Hester of Norton Healthcare said, as of Wednesday, his network of hospitals had 176,” 80% of whom were unvaccinated for the virus. Eleven cases were children.

Chuck Anderson of Baptist Health said the state’s largest hospital chain saw a “big jump” in Covid-19 patients this week, to 320. The system’s peak last winter was 400, he said.
Kentucky hospitals reported 1,434 Covid-19 patients, an increase of 104 from Tuesday; 369 of them in intensive care (up 27); and 220 on mechanical ventilation (up 17).

Eight of the state’s 10 hospital readiness regions are using at least 90% of their intensive-care capacity, with seven above 96%.

Beshear said Monday that hospitals had not sent out any alarms regarding a shortage of beds or staff. President Biden’s top health adviser, Dr. Anthony Fauci, has warned that even though the Omicron variant may cause less severe illness, an onslaught of new infections could overwhelm hospitals.

Beshear said Monday that “the number one thing” Kentuckians can do to decrease hospitalizations is to get a Covid-19 vaccine and get boosted.

The state reported 21 more Covid-19 deaths Wednesday, bringing its pandemic death toll to 12,118. Over the last 14 days, the state has reported 30.4 deaths per day. The Times reported Tuesday that Kentucky’s death rate since vaccines became widely available is fourth in the nation.

The state does not plan to issue any more pandemic reports until Monday.