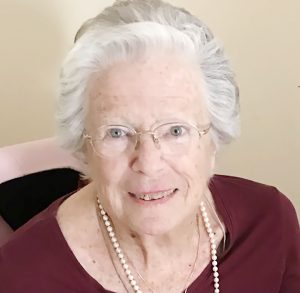 Anne Rogers, 90, died January 1, in Lexington. She was the only child of the late George Gardner and Margaret Stinnette McNeill; she was also nurtured by a cherished aunt, Virginia McNeill Lamb.

She is survived by Gardner and Emily Rogers, Valdosta, GA, Boyd and Cookie Rogers, Jacksonville, FL, Joel and Robin Boaz Singer of Carmel, IN, and Bradley Boaz of Leesburg, IN.

She was predeceased by her former husband, William B. Rogers, and her later beloved companion, Dr. William D. Boaz.

Mrs. Rogers was Director of the Paris-Bourbon Co. Library for 31 years, a Lay Minister of the Christian Church (Disciples of Christ), and in her retirement a Donovan Scholar at the Lexington Theological Seminary. She was a member of the Jemima Johnson Chapter of NSDAR and the North Middletown Christian Church (D.O.C.), a long-time member of the Paris-Bourbon Co. YMCA board, and active in her church and community.

A memorial service will be held later; in lieu of flowers, gifts to the North Middletown Christian Church General Fund would be most meaningful to her.